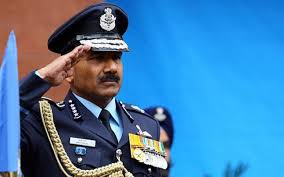 The situation is “live” in the wake of the surgical strikes on terror launch pads across the LoC and the armed forces are ready to deal with any challenge, IAF Chief Marshal Arup Raha said on Tuesday.

He also said it was just a “coincidence” that Pakistan’s air force’s “High Mark” exercise took place at a time when tension between India and Pakistan was high.

Even as he refused to take questions on the surgical strikes by the Army last week during his customary annual press conference ahead of the Air Force Day on October 8, Raha said the force has the power to punish its enemy, but a decision on using it in an offensive role will have to be taken by the government.

“Air Force, Army, and Navy are always ready,” Raha, who is also the Chairman, Chief of Staff Committee (COSC), said.

When told would it not be a let down if he did not comment on the surgical strikes, Raha candidly said he was in “half a mind” to call off the media interaction because he knew everybody is charged up and he will be asked questions on the issue.

“I think I should not say anything because it is very sensitive and things are still live,” the Air Chief Marshal said.

He asserted that the IAF is capable of taking on any contingency that one can think of.

Raha is the first chief among the three Services to face the media after the surgical strikes.

Officials have remained tight-lipped about the operation except for a short and crisp statement by Director General of Military Operations (DGMO) Lt Gen Ranbir Singh.