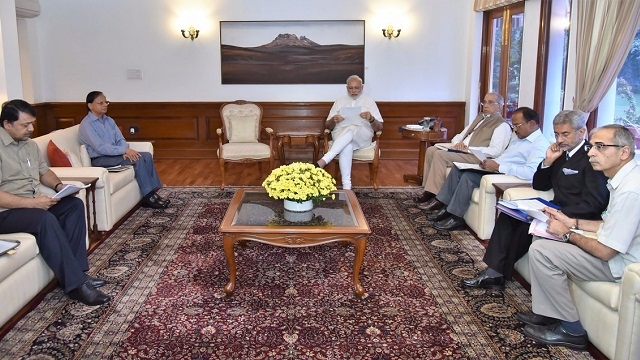 New Delhi: Amidst heightened tension between India and Pakistan, Prime Minister Narendra Modi on Monday chaired a meeting to review the Indus Water treaty with the neighboring country.

The review is being undertaken as India weighs options to give a befitting response to Pakistan in the wake of the Uri attack that left 18 soldiers dead.

There have been consistent calls in India that the government scraps the water distribution pact to mount pressure on Pakistan in the aftermath of the terror attack.

Under the treaty, which was signed by Prime Minister Jawaharlal Nehru and Pakistan President Ayub Khan in September 1960, water of six river – Beas, Ravi, Sutlej, Indus, Chenab and Jhelum – were to be shared between the two countries.

Pakistan has been complaining of not receiving enough water and gone for international arbitration in couple of cases.

Jammu and Kashmir Deputy Chief Minister Nirmal Singh had said last week that his state will fully support whatever decision is taken by the Union government on the 1960 agreement.

“The treaty has caused huge loss to Jammu and Kashmir” as the people of the state cannot fully utilise the waters of various rivers, particularly Chenab in Jammu, for agricultural and other activities, Singh had said.

“The state government will support whatever decision is taken by the central government on Indus Waters Treaty,” he had said.

India had last week made it clear that “mutual trust and cooperation” was important for such a treaty to work.

Analysts say that scraping the water distribution pact will not be a good and wise decision by the government as water being one of the most essential need, it may lead to outrage by the world leaders against India.