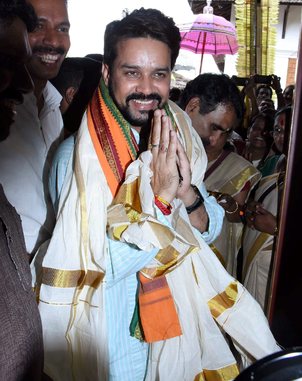 In the backdrop of the Uri terror attack, BCCI chief Anurag Thakur today ruled out the possibility of reviving bilateral cricket ties with Pakistan in near future, saying even considering such a thought is not appropriate.

Here to attend the BJP National Council meet, Thakur, who is also a party MP and president of its youth wing, struck a combative note, saying India can decimate Pakistan anytime but it is more important to isolate it globally.

“In the context of what has happened even considering such a thought is not appropriate,” he told reporters when asked if there is any plan to play cricket with Pakistan.

He added that there is no scheduled series with Pakistan this year.

India’s relationship with Pakistan has nosedived following the Uri terror attack amid an outcry for retaliation against the neighbour.

Thakur, also an territorial army officer, said, “India has defeated Pakistan in wars of 1965, 1971 and Kargil.

It also defeated Pakistan in all World Cup cricket matches. It can decimate Pakistan anytime but it is more important to isolate it globally.