The much-awaited trailer of the film ‘Ae Dil Hai Mushkil’ starring the fresh and sensual pair of Ranbir Kapoor and Aishwarya Rai Bachchan is here and it is just awesome! 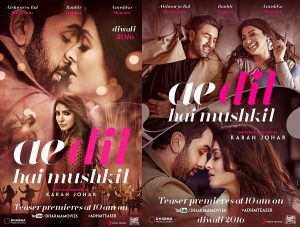 Ae Dil Hai Mushkil appears to be peppered with semi-Urdu dialogues, This is Karan Johar‘s tale of heartbreak land, dipped with an essence of Love and Friendship, unlike all the other movies of Karan Johar.

Karan Johar advances his journey of love and friendship, and the dilemmas within, in his forthcoming Diwali release ‘Ae Dil Hai Mushkil.’ The trailer ensures for the movie to be a signature Karan Johar flick, but with a much more emotion and complexity than his last few projects as the director. 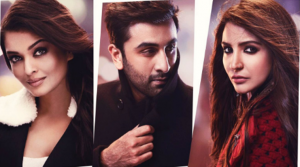 Karan Johar has also composed this tale of unanswered love and friendship between Ayan (Ranbir), Alizeh (Anushka) and Saba (Aishwarya). The trailer opens on a light note where Ranbir and Anushka appear to be close friends. Ranbir’s philosophy about love feeling like a slap in the face brings the wind of despair. While Fawad Khan appears to be Anushka’s blast from the past, Aishwarya Rai Bachchan is the bold poet that Ranbir falls in love with. To be honest, it looks like Aishwarya is at her greatest in the film performing an eccentric character who hopes to be Ranbir’s poetic pursuance, rather than his mate.

ALSO READ: Dog’ hired as a professor at this US University

Although the film has KJo’s favourite themes- a beautiful heroine on a snow peak, reflecting frames, an extravagant wedding, and foreign scenes, it also reveals the strength of messy relationships and unfulfilled aspirations. The trailer leaves a lot of unspoken tales, which will be open after its release.

The film’s music is already shaking our playlists with the film’s title track and the Sufi number Bulleya. Ae Dil Hai Mushkil will theatres on 28 October.