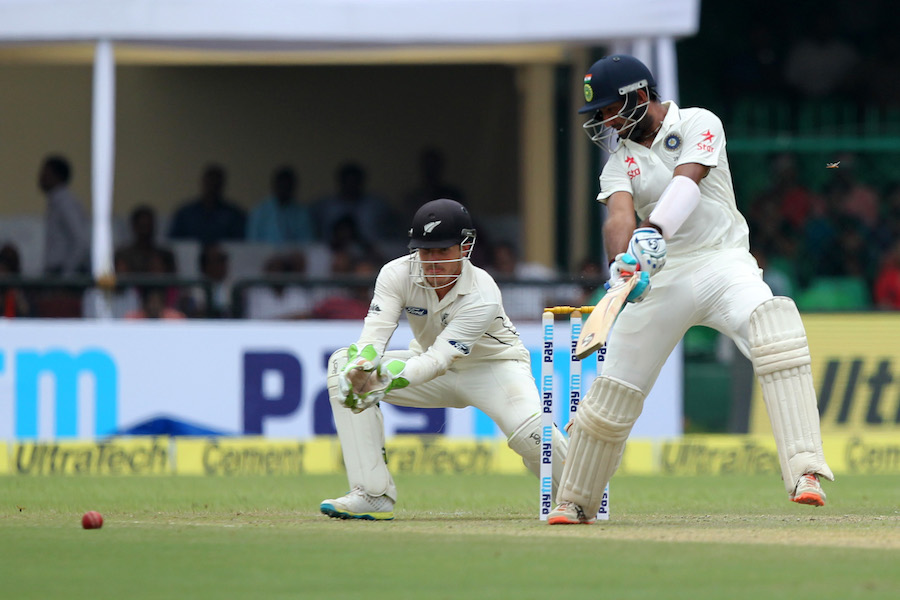 India made a solid start in the opening cricket Test against New Zealand reaching 105 for 1 at lunch on the first day after opener Murali Vijay and one drop Cheteshwar Pujara conjured a half-century plus stand. Deciding to bat in the historic 500th Test under overcast conditions, Indian batsmen looked comfortable even as New Zealand put all three spinners at work.

In-form Rahul looked graceful during his 32 off 39 balls before he was caught behind off a faster delivery from left-arm spinner Mitchell Santner delivery. Another opener Vijay (39 off 88) worked the ball around to keep the scoreboard ticking and giving him company at the break was Pujara (34 off 58), who carried on with his good form in the Duleep Trophy.

Off the 31 overs in the first session, 21 were bowled by the three spinners. Vijay was patient in his approach and helped himself with four shots to the fence while Pujara was swift and scored at a decent pace, hitting five boundaries in the process. Earlier, Rahul made a cracking start, hitting two crisp boundaries off left-arm seamer Trent Boult in the very first over of the match.

Neil Wagner kept banging it short to test the Indian openers while Boult preferred fullish length. Rahul was confident and comfortable at the crease and never looked like being troubled by either of the two fast bowlers. Kiwi skipper introduced Santner in the eighth over and continued with Wagner from one end. Rahul swept the left-arm spinner for a six but the Kiwi bowler exacted his revenge by having the young Indian batsmen caught behind in the next over. It was a little quicker off the pitch, Rahul’s unsure forward defensive prod resulted in an edge and wicketkeeper BJ Watling took a smart catch.

Encouraged by the success of a spinner early in the innings, Williamson brought in off-break bowler Mark Craig. Pujara, coming into the match on the back of a first-class double century, looked confident while stroking on both sides of the wicket and used his feet well to work the ball around.

While Santner asked a few question the Indian batsmen handled Craig with ease. Both the spinners flighted the ball but it being a first-day pitch, there was not much purchase from it. Craig, a few times bowled from wide-off the crease, but the Indians were hardly troubled.