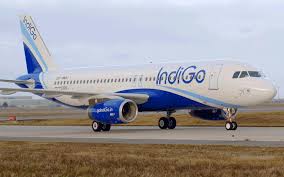 A Bengaluru-bound IndiGo flight made an emergency landing at the city airport this afternoon as a two-month old baby, suffering from a heart ailment, required immediate medical attention, an airport official said.

However, despite the efforts, the child could not be saved and was declared brought dead at a city hospital.
“The aircraft landed here at around 2.30 PM to address the medical emergency after a family complained of a health problem suffered by their two-month old baby,” Director, Swami Vivekanand International Airport, Santosh Dhoke told PTI.

With all the standard emergency procedures in place, the Kolkata-Bengaluru flight touched down and the child was immediately deplaned along with the family members. The baby was rushed to a local hospital in an ambulance, the official said.

According to another official, the baby was suffering from some heart ailment, for which it was being taken to Bengaluru.

“However, after the child was rushed to the private hospital in Shanti Nagar area here, it was declared brought dead,” the official added.

The plane waited for the response from the family and when it was informed that the child is no more, it took off for its further journey at around 3.30 PM, he added.

The number of passengers in the flight could not be known immediately.