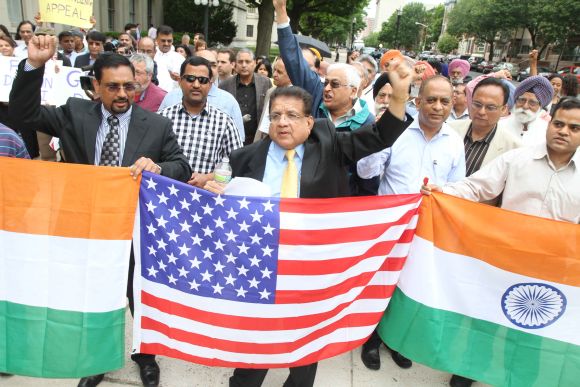 The Indian-American community has asked the US government to designate Pakistan a state sponsor of terrorism and impose sanctions on it following the terror attack in Uri that killed 18 soldiers.

“Enough is enough. It is time that Pakistan be designated as a state sponsor of terrorism,” said Jagdish Sewhani president of American India Public Affairs Committee.

Referring to various unilateral peace initiatives of Prime Minister Narendra Modi after coming to power in May 2014 including the invitation of his Pakistani counterpart Nawaz Sharif to his swearing in ceremony and Lahore visit last December, Sewhani said Islamabad had interpreted these overtures as India’s weakness.

“Leaders of Pakistan need to understand the price they might have to pay for their continuing support to terrorist activities in India,” Sewhani said, adding that both the Obama administration and the US Congress needed to send a strong message to Pakistan by declaring it a state sponsor of terrorism and impose sanctions on it.

“The ability of groups such as Jaish-e-Mohammad to operate freely and with impunity in Pakistan are a direct indication of state sponsored terrorism by the country’s intelligence services and military apparatus,” said Samir Kalra, senior director and Human Rights Fellow at the Hindu American Foundation.

The foundation said the attack was allegedly carried out by Jaish-e-Mohammad, a Pakistan-based militant group and a US designated Foreign Terrorist Organisation, believed to receive military and logistical support from the Pakistani army.

“Since 1989, a militant insurgency supported by Pakistan’s Inter-Services Intelligence agency has left thousands of Hindus dead, and has driven out more than 350,000 people from the Kashmiri Pandit community from the Kashmir Valley,” it alleged.

“It is time for the US to take a serious look at the foreign military assistance to Pakistan and how those resources are being diverted to cross-border terrorism and other nefarious activities,” said Indian National Overseas Congress, USA.

“We join the civilised people everywhere in condemning this dastardly attack across the border from Pakistan and offer our condolences and prayers to families of those who have paid the ultimate sacrifice with their lives,” said George Abraham, chairman, INOC, USA.

“We also call upon Pakistan to stop exporting terrorism and return the region to relative peace and tranquility,” Abraham said.

Eighteen soldiers were killed and over a dozen others injured as heavily armed militants stormed a battalion headquarters of the force in North Kashmir’s Uri town early Sunday.

Four militants involved in the terror strike were killed by the Army.