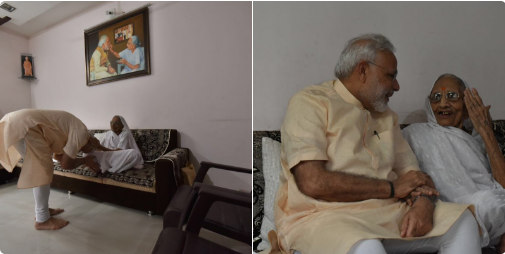 Gandhinagar: Prime Minister Narendra Modi on Saturday visited his mother Hiraba and took her blessings on his 66th birthday.

Modi reached the residence of his brother Pankaj Modi in Raysan area of state capital here, where his 97-year-old mother is staying.

The Prime Minister sought her blessings and spend around 25 minutes with her. He later drove off to Raj Bhavan where he is put up during his visit.

Born on September 17, 1950, Modi turned 66 today. He is here to spend his birthday between tribal and Divyangs (differently abled).

He will travel to Limkheda of Dahod and inaugurate many schemes for development of this tribal district later in the day.

Later in the afternoon he would go to Navsari where he is scheduled to take part in a function where aid would be distributed to the differently-abled persons.