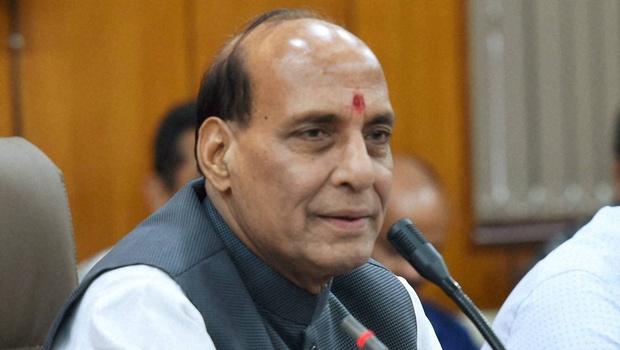 A day after Hurriyat leaders rebuffed talks with the all-party delegation that is visiting Kashmir, Home Minister Rajnath Singh made government’s stand clear towards separatists in the valley.

During his address, Singh stated that Kashmir has always been an integral part of India and attacked the separatists for snubbing the talks. He also assured that the pellet guns would be replaced with chilli-based PAVA shells.

Singh stated that the delegation comprising of 26 delegates from 20 parties had met with over 300 people and engaged with all stakeholders in talks. The delegation was in Jammu on Sunday.

Training guns on separatists, he said that they were “not on the path of Kashmiriyat“. Singh accused them of being against democracy and said that the government is always ready to talk to everyone who wants peace in the valley.

The Home Minister asserted that the Parliament was serious about the Kashmir issue, and said that everybody wanted peace in the valley.

Referring to members of all party delegation approaching Hurriyat leaders on Sunday, he said, “If someone goes to talk and separatists don’t talk,then they clearly don’t believe in ‘Insaniyat, Kashmiriyat, Jamooriyat.'”

Singh also stated, “I am fully confident that the situation in Jammu and Kashmir will improve,” and added, “Everyone is very concerned, we all are of the view that things in Kashmir need to improve.”

Meanwhile Congress leader Ghulam Nabi Azad said separatists should not choose to meet only the Pakistan High Commissioner and felt that the all-party delegation’s visit was “fruitful” though it did not give the desired result.  Speaking to reporters, he said the delegation “tried to reach out to everyone” but it is the government that has to identify the stakeholders.

Everyone wants to find a solution to the Kashmir issue. Everyone in the country is worried about the situation,” Azad said, a day after Hurriyat leaders rebuffed attempts by some MPs to hold talks with them.
The Leader of Opposition in Rajya Sabha said that Congress wants that the door for talks should be kept open.  “Some friends tried to reach out to Hurriyat. At some places they succeeded, at some they did not,” Azad said.  He said the visit is not yet complete and the meetings are going on.
The all-party delegation which wrapped its Srinagar-leg of the two-day visit arrived here in the afternoon.
On the issue of Kashmiri Pandits, Azad said, “In the three round table conferences they participated. Why they are not coming is a surprise. The suggestions made by them were addressed then. They could have come today also…. Time is no concern when Parliament plans to discuss an issue.”  The Kashmiri Pandits have refused to meet the all-party delegation saying the time given to them is very less.  “Kashmiri people are suffering. Nothing is working. We want peace to come to the Valley. It was a fruitful visit where good suggestions were received,” he said.
ShareTweetGoogleWhatsappPrint
Mail