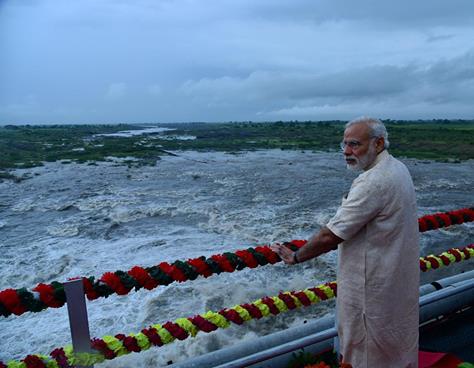 Jamnagar: In a heroic move, Prime Minister Narendra Modi on Tuesday during the inauguration of water project in Gujarat saved the lives of several cameramen and photographers, Deputy Chief Minister of Gujarat Nitin Patel informed.

Speaking at a function here after Modi inaugurated the ambitious Saurashtra Narmada Avataran for Irrigation (SAUNI) project, Patel said that the Prime Minister was just looking at the flow of the water at the Aji-3 dam site after pushing a button to start the release from the dam.

“He suddenly noticed that several cameramen and photographers were standing on the downstream side. The strong flow of water released a little while ago was racing towards them and could have washed them away,” Patel said.

Busy taking photographs of the event, the cameramen and photographers were seemingly unaware of it. But by clapping his hands and with other gestures the Prime Minister alerted them and they escaped in time.

ALSO READ: Get ready for the Big iPhone launch on September 7