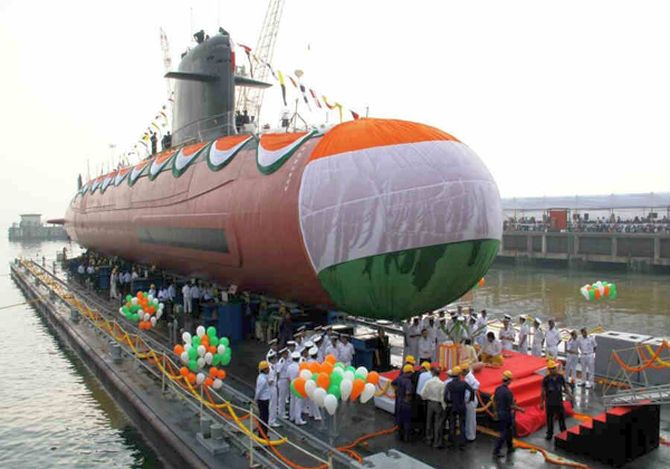 New Delhi: In a major security threat French defence contractor DCNS has been hit by a massive leak of secret data on India’s  Scorpene-class submarines.

This is likely to alarm India, Malaysia and Chile, the Australian newspaper reported on Wednesday.

The 22,400 leaked pages, which the daily said it had seen, detail the combat capability of the Scorpene-class submarine DCNS designed for the Indian navy, and variants of which are used by Malaysia and Chile.

Brazil is also due to deploy the vessels from 2018.

Australia awarded DCNS an Aus$50 billion ($38 billion) contract last April to design and build its next generation of submarines.

ALSO READ: Kashmir to be decided by the parties involved: US

But Prime Minister Malcolm Turnbull sought to play down the impact in Canberra saying while the leak was “of concern”, the Scorpene was a different model to the subs Australia is buying.

“The submarine we are building or will be building with the French is called the Barracuda, quite, completely different submarine to the Scorpene they are building for India,” he told Channel Seven.

“We have the highest security protections on all of our defence information, whether it is in partnership with other countries or entirely within Australia.”

First of the Scorpene class submarines being built in India Kalvari went for sea trials in May, 2016 and is expected to be inducted in the Indian Navy soon.

Indian Navy officials have said the six submarines, once inducted, would form the core of the Navy’s submarine arm for the next two decades.

They also included thousands of pages on the submarine sensors and thousands more on its communication and navigation systems as well as nearly 500 pages on the torpedo launch system alone.

DCNS said that it was aware of the articles published in the Australian press and that “national security authorities” had launched an inquiry into the matter, without giving details.

“This inquiry will determine the precise nature of the documents which have been leaked, the potential damage to our customers as well as those responsible.”

The Australian said DCNS implied that the leak may have come from India rather than France.

The daily, however, said the data was thought to have been removed from France in 2011 by a former French navy officer who at the time was a subcontractor for DCNS.

The data is believed to have passed through firms in Southeast Asia before eventually being mailed to a company in Australia, the newspaper said.
The DCNS website says the new vessel would be “the recipient of France’s most sensitive and protected submarine technology and will be the most lethal conventional submarine ever contemplated”.