A twenty-year-old student from Rio has shared photos of what appear to be her with Usain Bolt after a wild night of partying on the final weekend of the Olympics. The video, reportedly taken as the track star celebrated his 30th birthday the day after winning the men’s 4x100m relay with his Jamaican teammates, shows Bolt dirty dancing with a young lady very familiar with the art of twerking.

Usain Bolt.
Club Alin Rio, 2016.
After conquering the world with the triple triple…pic.twitter.com/1MHm8ZrTDb

However, he didn’t appear to be too concerned about keeping secret his grinding.  The video shows Bolt swinging his baton up against the woman’s backside. His hands run all over the woman in the same way they caressed his swag of gold medals earlier that day.

#UsainBolt hit the club to celebrate his wins and his 30th birthday like….

Jady Duarte shared WhatsApp pictures that show her wearing a white top while embracing a bare-torsoed Bolt – who has a long-term girlfriend.
In one of the photos – which first appeared on several Brazilian websites including El Globo after Duarte shared them with friends. 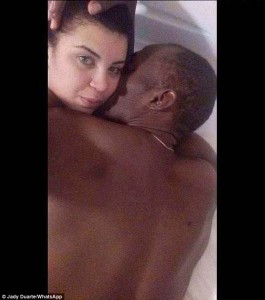 Duarte a kiss on the cheek while she looks into the camera.The Jamaican sprinter, who turned 30 on Sunday, was also pictured partying until the early hours of the morning at All In, a club in the Barra de Tijuca suburb of Rio. 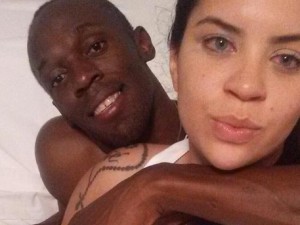 It was a wild end to the sprinter’s third and apparently final Olympics where he won another three gold medals, cementing his legacy as one of the greatest sprinters of all time. 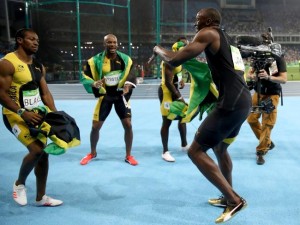 Bolt made an early exit from Rio Sunday night – departing a day earlier than planned and missing the Closing Ceremony entirely.