Olympics will not be High 'Bolt' age any more | Newsmobile
Saturday, July 2, 2022 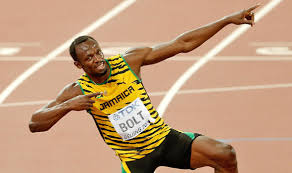 The Olympics is going to miss the Lightning Bolt pose that has lit up the last three Games at a time when athletics desperately needs a hero.

When Usain Bolt crosses the finish line and starts pounding his chest, it resonates with the public around the world.

But after his 4x100m triumph in Rio on Friday, the Rio crowd celebrated in the knowledge that they were witnessing the departure of a legend.

From his first 100m Olympic gold in Beijing, when the Jamaican astonished the world with his 9.69sec time, Usain St Leo Bolt has been the real star.

On top of his record-equalling nine athletics gold medals, Bolt, who will be 30 on Sunday, is confident, relaxed and supremely connected with the crowds he attracts wherever he goes.

His mother seems to think that the young Bolt, who will retire after next year’s world championships, was born to run.

Born in Trelawny parish near Montego Bay — where a host of sprinters including the shamed Ben Johnson also come from — Bolt was something special from the start, according to Jennifer Bolt.

“After three weeks he was pushing because he was so strong,” the mother said.

“One day, I left him on the bed and when I came back he was close to falling off, so from here I was saying, ‘What kind of child he is?” she recalled.

By the age of 12, Bolt was the fastest in his school. “He was always on top,” she said.

A school cricket coach urged him to try track and field and his talent gradually grew, though as in his races his progression was not always fast out of the blocks.

At the world youth championships in 2001, he was entered for the 200m but failed to make the finals. His coaches were often frustrated at his reluctance to train and his practical jokes.

But at the age of 15 he was already 1.96 metres (6ft 5in) and at the world junior championships in 2002 he won the 200m. He is one of just a handful of athletes to have won world titles at junior, youth and senior levels.

The after-effects of a leg injury meant he did not get past the first round in the 200m at the 2004 Athens Olympics, where his Rio rival Justin Gatlin won the 100m.

Bolt set his first 100m world record (9.72sec) in May 2008 in New York. The Jamaican then stormed the Beijing Olympics with his first 100m, 200m, relay treble. The world was forced to take notice of his chest-beating.

His 9.58 record at the world championships in Berlin in 2009 was an even bigger sensation.

After completing the ‘triple triple’ of Olympic sprint titles in Rio on Friday, Bolt summed it up by saying: “There you go. I’m the greatest.”

Athletics bosses must wish he could stay longer. Bolt has said he will hang up his spikes after next year’s world championships in London.

With each major win he has deflected attention away from bad news for track and field.

In Beijing it was the doping controversy surrounding women’s sprint star Marion Jones and her boyfriend Tim Montgomery. Gatlin was unable to defend his title as he was serving an initial eight-year doping ban, which was reduced to four.

Other rivals have also been tainted and fallen by the wayside.

Bolt has maintained his common touch with the crowds through all this.

At the 2013 world championships in Moscow, with heavy rain falling, Bolt mimed putting up an umbrella and appropriately lightning bolts lit up the sky around the stadium.

Bolt has made it clear why he feels obliged to give something back to the spectators.

“A lot of people come out to see what I’m going to do today, tomorrow and it’s fun for them,” he said.

“I enjoy showing them and giving them the joy I get out of doing this because they give me the energy to do it so I’m always hungry.”
Video Courtesy: Youtube