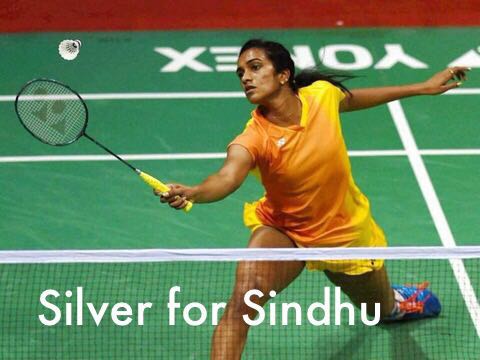 A nation of billions remained glued to their TV screens as PV Sindhu played the women’s final in badminton against current world champion Carolina Marin. At a mere 21 years old, Sindhu made India proud and proved her mettle by becoming the youngest Indian ever to win a silver medal.

In a power play of smashes, Sindhu displayed grit and determination against her accomplished Spanish rival. Marin, who is not only world champion but also the current European champion, will be adding the Olympic gold to her illustrious career.

Sindhu played to her strengths, pushing the shuttle deep into the court with her towering reach. She played an aggressive game till the end, refusing to give up even when the odds were against her.

Sindhu took the opening set 21-19 right from under her the Spaniard’s nose. Marin, however, came back roaring with a 21-12 win in the second set, maintaining a lead of 9-points throughout the set.

In the third game, Marin took an early lead but Sindhu followed closely on Marin’s heels and fought her tooth-and-nail, even taking six straight points from the Spaniard in a pivotal moment. She battered Marin with smashes, before finally succumbing to her fast and fantastic footwork and losing the set to her 21-15.

Sindhu still has plenty to be proud of – she’s made it into the history books by becoming the first Indian shuttler ever to play an Olympic final in badminton and the first ever Indian athlete to bag a silver medal.

Sindhu’s popularity was clearly evident – she was the fan favourite, playing amidst fervent chants of “Go, Sindhu go!” She may have won silver, but her-never-say-die attitude throughout her whole Rio campaign stole the hearts of the entire nation.