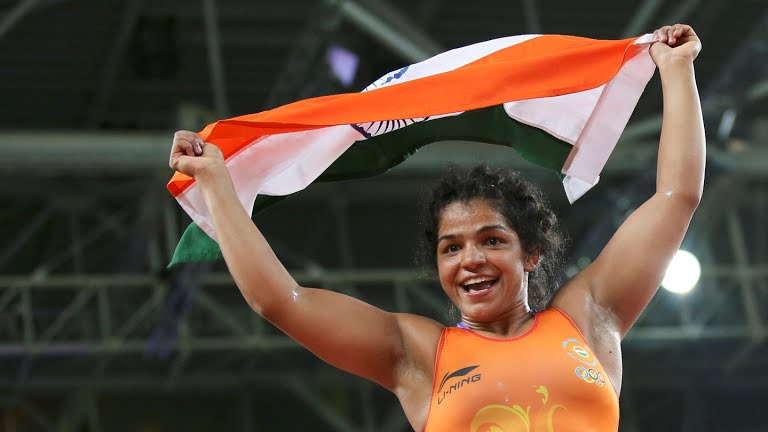 Showing extraordinary fighting spirit, woman wrestler Sakshi Malik ended India’s frustrating medal drought with a dramatic bronze-winning effort on day 12 of the Rio Olympic Games here. Sakshi fought five bruising battles in the 58kg categoryagainst equally determined opponents in a single day beforesecuring the podium place. She had lost her quarterfinal bout but got a fresh leaseof life when her Russian conqueror reached the final, allowing the Indian to compete in the repechage round. The 23-year-old grappler from Haryana climbed the medal rostrum with a spectacular come-from-behind 8-5 win over Aisuluu Tynybekova of Kyrgyzstan after trailing 0-5 in thefirst period. She jumped on the mat with ear-to-ear smile before beinghoisted by her coach Kuldeep Singh with the Indian tricolour draped around her. It was the fifth bronze in wrestling for India in itslong Olympic history stretching back to 1952 Helsinki Gameswhen Kashaba Jadhav became its first individual medallist. She is also the fourth female Olympic medallist fromIndia, joining the ranks of weightlifter Karnam Malleshwari(2000, Sydney), boxer MC Mary Kom (2012, London) and shuttler Saina Nehwal (2012, London). Sakshi also became the first female grappler from Indiato climb the podium in the quadrennial sports spectacle – the other four medals being won by men with two of those claimed by Sushil Kumar in 2008 Beijing and 2012 London. “Meri 12 saal ki tapasya rang layi (It’s the fruit of mypersistent hard work in the last 12 years). Geeta didi, mysenior had qualified for the first time in London. I neverthought I would become the first woman wrestler from India tobag an Olympic medal in wrestling,” Sakshi said with tears ofjoy in her eyes. Her bronze medal winning feat was like a balm as it cameafter Vinesh Phogat was forced out of the 48kg competition dueto an unfortunate knee injury suffered during her quarterfinalbout against Chinese rival Sun Yanan. Vinesh had to be stretchered off the arena. The MRI scanconfirmed a knee ligament tear. The injury occurred when theChinese was leading 1-0. The day for India commenced with the elimination ofshuttler Kidambi Srikanth, who went down fighting againstdefending champion Lin Dan to dash India’s medal hopes inmen’s singles. Taking the court a day after compatriot P V Sindhu hadknocked out top Chinese shuttler Wang Yihan to enter thewomen’s singles semis, Srikanth gave Super Dan a tough time before going down 6-21 21-11 18-21 against the World No. 3. The 21-year-old Hyderabad shuttler’s elimination after his loss to Dan in an hour and four minutes in the quarterfinals has left Sindhu as the lone Indian out of seven entrants in the fray in badminton. Sindhu is to take on Japan’s Nozomi Okuhara on day 13 fora place in the final.