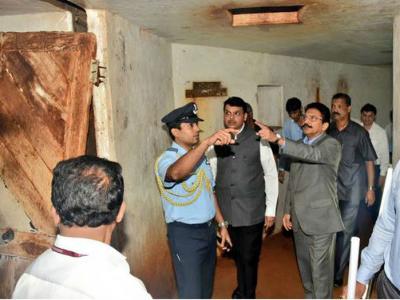 A 150-meter long underground British era bunker, which had been closed for several decades, was discovered by Maharashtra Governor Ch Vidyasagar Rao inside the Raj Bhavan complex at Malabar Hill in Mumbai.
Rao accompanied by his wife Vinodha visited the bunker on Tuesday, after which the Governor expressed his intention to consult experts from various fields to preserve it.
The Governor had directed to get the bunker opened after he was informed by old-timers three months ago about the presence of a tunnel inside the Raj Bhavan.
On August 12, the staff of the Public Works Department at Raj Bhavan broke open a temporary wall that closed the entrance to the bunker on the eastern side, the official said in a statement.
Instead of an underground tunnel, an entire barrack with 13 rooms of different sizes was found.
The bunker opens with a 20-ft tall gate and a ramp on the western side. There are long passages and small to medium rooms on either side, he said.
The bunker spread over an area of over 5,000 square feet has rooms bearing the name Shell Store, Gun Shell, Cartridge Store, Shell Lift, Pump, Workshop etc. There are also scores of Lamp Recesses in the gangway.