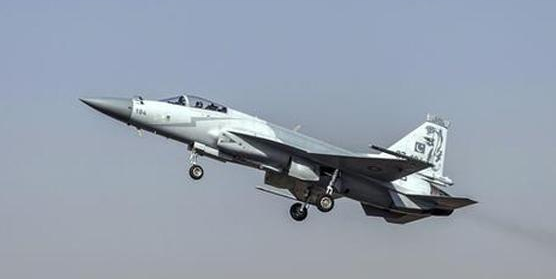 A video shot for Independence Day celebrations left many in the government red faced as it featured a Pakistan fighter jet flying with the tricolour.
The video, posted on Twitter, was, however, removed after the Twitterati pointed out that the jets were in fact Pakistani aircraft.
The opening portion of the Culture Ministry’s over one-minute video celebrating ’70 years of Independence’ featured an animated sequence of the two JF-17 flying with the Indian flag.
A government source said it was an inadvertent mistake as the JF-17 looks similar to India’s Tejas light combat aircraft and it is difficult for an ordinary citizen to know the difference between the two types of aircraft.
However, realising the mistake, it was removed promptly, the source added.
The JF-17 jet was jointly developed by Pakistan and China and both are promoting it big time to garner global supply orders.
Incidentally, Sri Lanka, which was in talks for the JF-17, has rejected the aircraft and is now eyeing Tejas. Pakistan intends to make it the main stay of its fighter fleet.
In March 2011, Pakistan Navy had issued a full-page advertisement, which appeared in several Pakistani newspapers, featuring the Indian Navy’s Delhi, Godavari and Talwar-class warships for the Aman-11 multi-national exercise.