When teaser of the Dhoni biopic was launched in March and created a lot of waves in the social media. The atmosphere was just right for teaser launched, as ICC T20 world cup had just began. People were applauding their captain and they appreciated the teaser with an open heart.

Finally the wait is over, and much awaited trailer of Dhoni biopic ‘M. S. Dhoni – The Untold Story’ has been launched by MS Dhoni himself.

No doubt Mahendra Singh Dhoni is one of the greatest captain of Indian Cricket. Hailing from a middle class family, he took the Indian Cricket to new heights. His contribution into the game is outstanding and incomparable.

Here are the twitter reaction on the Mahi’s Biopic:

As I walked the path, the journey became my life. Here’s a glimpse of it. https://t.co/tNaMmQosSa

You’ve watched him create history. Watch the #MSDhoniTrailer now to know about his journey: https://t.co/b7DS4RuiFT

@BajpayeeManoj all time big fan of yours .. You every movie let me know the class of acting hats off to you legend

This is one film am waiting to see. Most loved captain and a friend @msdhoni 👏🏼 https://t.co/Cryec5vI5k

Loved the Trailer Dhoni bhai @msdhoni . Its gonna be bombastic and classy like you!!!looking forward to watch it, Ruuh khush ho gayi!!👌👍👍

#MSDhoniTrailer Gave me goosebumps!@itsSSR U seem to hav lived the character, nt played it! 🙌🏻👏🏻https://t.co/ulfnPNQMK9 Loved it @msdhoni 👌🏻

Legends aren’t made in a day. Here’s the untold story of the incredible @msdhoni! #JaiHo🙂 #MSDhoniTrailer: https://t.co/7cyEa48Zqa

Maybe its just my love for cricket. Or my love for India. Or for Sushant Singh Rajput But I loved the #DhoniTrailer https://t.co/fvnvck3htm

This shd be our most authentic sporting biopic. Congrats @msdhoni Am sure it will be a hit like your helicopter shot https://t.co/SK9LXw64fg

This should be really interesting. The trailer of the Dhoni film. Especially given how private he’s been. https://t.co/zQmox0GAIe

Bollywood actor Sushant Singh Rajput is playing the role of Dhoni. He has portrayed Dhoni extremely well. Be it Dhoni’s batting style, the way he walks or talks; Sushant has perfectly done the job. It is extremely difficult to differentiate real Dhoni and Sushant’s portrayal of Dhoni. 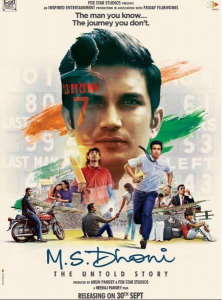 Kira Advani and Anupam Kher has also played important role in the movie. ‘M S Dhoni: The Untold Story’ is directed by Neeraj Pandey and produced by Fox Star Studios and Inspired Entertainment.

The journey starts on  September 30.