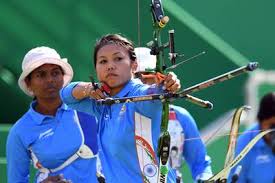 The Indian challenge in Olympic women’s archery event came to an abrupt end on Thursday after Laishram Bombayla Devi and Deepika Kumari lost their respective pre-quarterfinal matches by choking at crucial junctures here.

While Deepika was blanked 0-6 by World No.2 Tan Ya-Ting of Chinese Taipei, Bombayla lost 2-6 to World No.18 Alejandra Valencia of Mexico.

Both the archers were guilty of letting their nerves get the better of them.

Deepika was the first to take aim on Thursday and failed to raise her game when it mattered, losing 27-28, 26-29, 27-30 in a lop-sided contest, during which she managed to hit the bull’s eye only once.

The former World No.1 was put under pressure by Ya-Ting from the very start and never really managed to threaten her more fancied opponent.

While Deepika seemed out of sorts in the high-pressure match, Ya-Ting was a picture of composure, calmly striking 6 perfect 10s — three of them back-to-back in the third set.

After losing the third set narrowly, the Indian just could not gather herself, striking a 6 off the first arrow in the fourth set, which ultimately proved to be her undoing.

The Indian challenge in archery is now being represented by Atanu Das in the men’s competition. Atanu will be in action tomorrow in the pre-quarters.