The trial run Delhi Metro heritage line begins this week. Much-anticipated that will take the commuters into the heart of the city and add three new stations to the network.

According to the report, the new 5.1-kilometre-long stretch known as the Purple Line will connect ITO to Kashmere Gate via Jama Masjid, Delhi Gate and Red Fort and is likely to become the favourite mode of transport for tourists hunting for a piece of history.

The line, part of the Metro’s Phase III and expected to open by November, is also set to ease congestion in the old city.

The heritage line is only a slice of Delhi Metro’s grand plans over the next year when it throws open Phase III, adding 15 stations and 4.7 million passengers to the city’s transport lifeline.

When Phase III ends in December, Delhi Metro would have added 142.7 km of new lines to its existing 190-km network and will be the world’s fourth-largest metro network.

Number of grids with several new interchange points — such as Dhaula Kuan, Mayur Vihar, Okhla and Greater Kailash will be added. 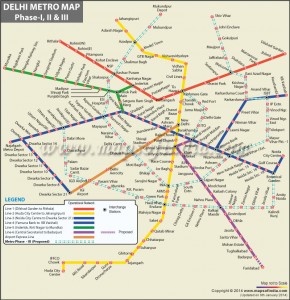