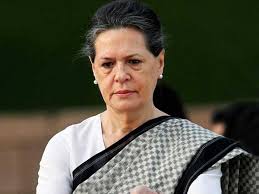 Congress Prez Sonia Gandhi fell ill during a Road Show. She had to abort the rally due to high fever in the constituency of Prime Minister, Varanasi. Her illness stopped her from visiting the Kashi Vishwanath temple.

Sonia Gandhi headed back to Delhi for medical attention. She has also skipped the parliament due to health reasons.

In a statement released, Sonia challenged the present political presence, BJP, asking, “What changed in reality? The poor has and the weak are being ignored, new atrocities are being inflicted on them. Women folk have to bear the weight of debilitating price rise…Unemployment has crossed the threshold of tolerance.”

The pitch for UP elections 2017 has been getting high as the parties have started campaigning.