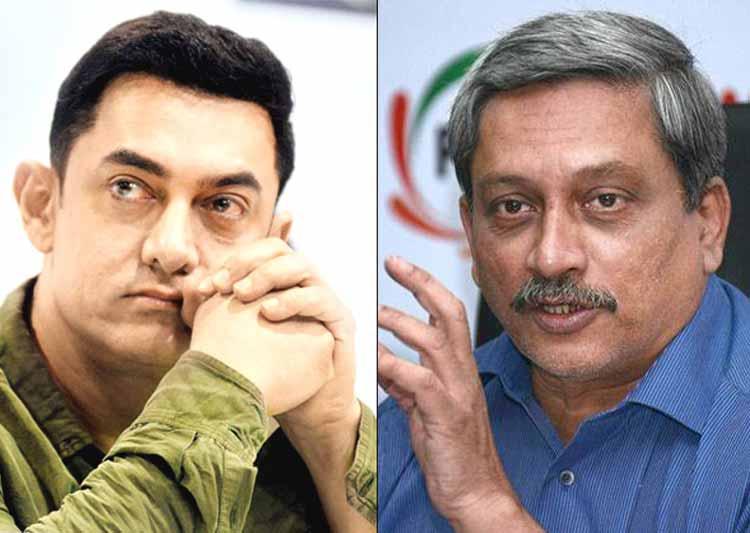 Manohar Parrikar said people who speak against the country need to be taught a lesson, after actor Amir Khan said his wife wants to leave India. The CPI(M)’s Sitaram Yechury said Parrikar is spreading insecurity.

While addressing reporters in Pune yesterday, the senior BJP leader had taken a veiled jibe at Khan who had earlier expressed a “sense of alarm” over “growing intolerance in country.”

“One actor had said that his wife wants to live out of India. It was an arrogant statement. If I am poor and my house is small, but I have to love my house and always dream to make a bungalow out of it,” Parrikar had said.

According to the report, the minister said,he has not taken anybody’s name. He had said that people who don’t respect the country should be opposed..I am opposed to ‘Upadrav’ (unrest). Such people should be opposed in a democratic manner…To oppose, seminars should be held.

Parrikar had said, “When the actor made the statement last year, people, while protesting his views, started uninstalling the online trading app, he was advertising for and the firm too pulled out the advertisement. He was trolled on Twitter too on his comments.

Is alarming that our defence is in the hands of this hate monger who wants those who disagree to be taught a lesson!https://t.co/HPdG8V2lS1

Wow! Thought he was a sane among Sanghi gang. Why does this gang always sound so violent? https://t.co/4pn0fOds2J

Is @manoharparrikar job to protect India from external aggressors like Pakistan or threaten fellow countrymen like actor Aamir Khan?

Has India’s Defense Minister made the stunning disclosure that @snapdeal was officially threatened by @BJP4India on @aamir_khan statement?

Also launching an oblique attack yesterday on JNU students’ leader Kanhaiya Kumar against the backdrop of alleged raising of anti-national slogans at JNU earlier this year, Parrikar had said, “such people who speak against the country need to be taught a lesson by the people of this country.”

Meanwhile, responding and defending to a query, Parrikar said, He never meant that nationalists are only in BJP. Non-political people and persons of different political parties could also be nationalists.

“Citizen of any other nation cannot comment against his country. So, people (speaking against the country) in India too should be opposed.”

In November last year, the “PK” actor had joined the chorus of intelligentsia against growing intolerance, saying he has been “alarmed” by a number of incidences and his wife Kiran Rao even suggested that they should probably leave the country.

Also Read: A Train from India to Russia