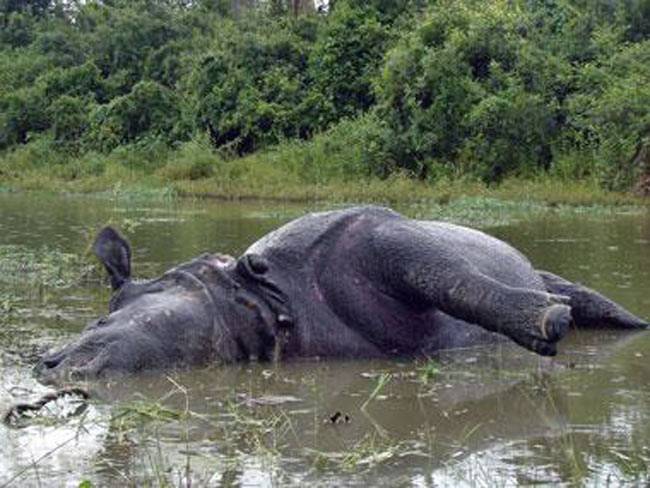 The world-famous Kaziranga National Park (KNP), which is still 80 per cent under water, has been robbed of as many as 218 animals, 17 of them being rhinos and over 166 hog deer by the floods in a span of just seven days.

According to  Kaziranga DFO Suvasish Das,  The flood-level has receded by one foot since yesterday and is much below the danger level now. But about 80 per cent of the Park area is still submerged. We have so far recorded the death of 218 animals which includes 17 rhinos and 166 hog deer, and the figure is likely to go up as the entire floodwater gets out of the Park.

Apart from the rhinos and hog deer, the Park lost 11 wild boar, nine swamp deer, six sambar, three buffalo, two hog badger, one porcupine and one python too. “All these we lost in just seven days, says report.

While 13 rhinos died due to drowning and four died of natural death due to old age, hog deer suffered the worst with 152 of them getting drowned and 12 knocked down by vehicles on National Highway and18 including eight rhinos are currently undergoing treatment at the Centre for Wildlife Rehabilitation.