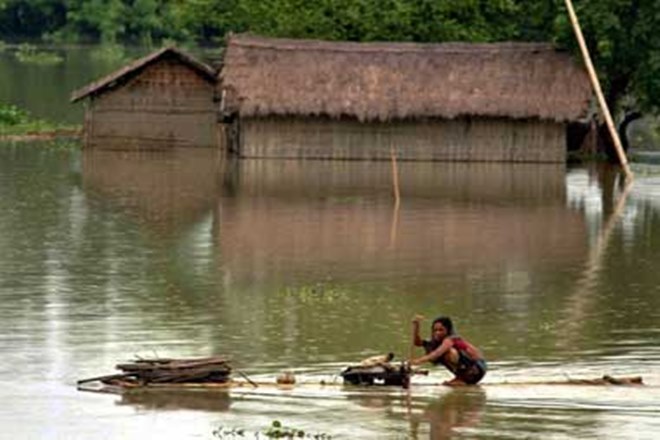 The northeastern parts of India are distressed with the continuous downpour of rain. As predicted earlier this month, the regions of Assam, Meghalaya, Bihar and West Bengal have been experiencing an intense situation of flooding. Sadly enough, the death toll has reached an alarming 32 people.
In Odessa, an additional 27 people were lost to lightning strikes on Saturday.

The state of Assam has been worst hit by the untamable monsoon.
Home Minister Rajnath Singh accompanied by chief minister Sarbananda Sonowal , surveyed the situation aerially, and said, “Over 30 lakh people and 28 districts have been affected. The problem is enormous.” He added “Just declaring floods a national problem is not the solution. The need of the hour is to find out what measures can prevent such a calamity.”

Mr. Singh has announced a compensation of Rs 4 lakh for the victims.
Several flood recovery and safety operations have been set up, which include approximately 400 relief camps and 102 highland shelters, sheething around than 2.40 lakh people. With a no-show by the rains on Saturday, the conditions, especially in the upper Assam, were upgraded slightly.
3 deaths had been reported in the downstream region of Brahmaputra, from the central and lower Assam. The Darrang district of the downstream has been in the worst state, with 1.85 lakh people affected. More than 1.95 lakh hectares of crop area is still drowned, especially in the Morigaon district of central Assam, and Barpeta of lower Assam. The districts of East Champaran and Muzaffarpur were also declared flood-struck on Saturday.