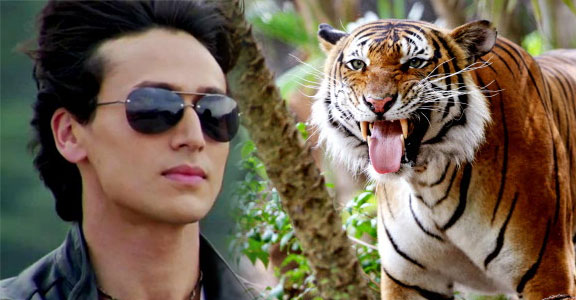 Marking the International Tiger Day, Bollywood actor Tiger Shroff wrote a letter to the Union Minister of State for Environment, Anil Madhav Dave, pressing the cause of protecting tigers.
Tiger, which is the national animal of India, has been tagged as an endangered species since several past years, given the hunting carried on for its unique skin, as well as the continued loss of natural habitat.
Hence, the actor, who goes by the same name as the being he wants to protect, is urging the government to protect the exotic cats in their natural abodes.
The letter, which was issued on behalf of People for the Ethical Treatment of Animals (PETA), reads- ” I am writing to bring your urgent attention to the plight of one of my favourite animals: Tigers.”
Tiger also wrote in the letter that a few years ago he himself had adopted a tigress in a zoo, but he presses that where tigers actually need protection and sanctuary in their natural habitat, where they are can roam freely and engage in natural behaviours.
Here is a copy of the letter Shroff sent to the Environment Minister: 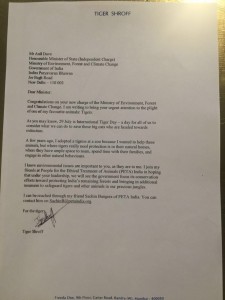 Tiger, who is soon to become a superhero in his reel-life for the upcoming movie- A Flying Jatt, seems to be falling on the same path in his real life as well.
Before Tiger, some other Bollywood celebrities have also joined arms with PETA for advocating the protection of the regal feline beings. These include Tiger’s father- Actor Jackie Shroff, Sonakshi Sinha, John Abraham, Aishwarya Rai, Madhuri Dixit, Virat Kohli, and several others.