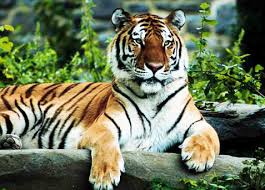 Today is  International Tiger Day. We all will share our tigers support with even some selfies today.But none of us really care how this lovely beast survives.
I am sure when you visit the jungle you will like child flash on seeing the tiger . All we want is clear picture of tiger as wildlife photographer or as tourist to show in our mobile

If we want to save this lovely beast  for your next generation to see then follow these steps to national parks in India.

International Tiger Day was founded in 2010 to protect and expand tiger habitats and raise awareness for conservation. About 3,890 tigers remain in the wild, the World Wide Fund for Nature said.

The tiger population in farms is about 8,000, more than double the estimated 3,900 living in the wild, WWF said in a statement.

The so-called Tiger Temple in western Thailand was closed in May after Thai wildlife officials discovered dozens of dead cubs inside a freezer.

“The shocking images from the Tiger Temple of tiger cubs frozen and prepared for the illegal trade provide clear evidence of what is really going on behind the scenes at these tiger farms and why they must be closed,” said WWF tiger specialist Michael Baltzer. But WWF said the “incredibly high operating costs” of these farms made it more likely they were involved in black-market trade.

Tiger parts are sometimes used in Asian remedies which are claimed to boost virility or fight disease.

Tiger farms “undermine efforts to protect wild tigers and halt the illegal trade by complicating enforcement activities, and by normalizing and legitimizing the sale of tiger parts and products, which in turn drives up demand,” WWF said.

A hastily-organised blanket closure of all tiger farms would however be disastrous for the animals, the organisation added.

Tigers living in farm-like captivity have become habituated to human presence and cannot simply be released in the wild, the group said.

It said a tiger resettlement plan needed to be in place before the farms were closed. a conference in St. Petersburg in 2010, 13 Asian countries agreed to double the number of tigers living in the wild on the continent by 2022, which is China’s next Year of the Tiger.