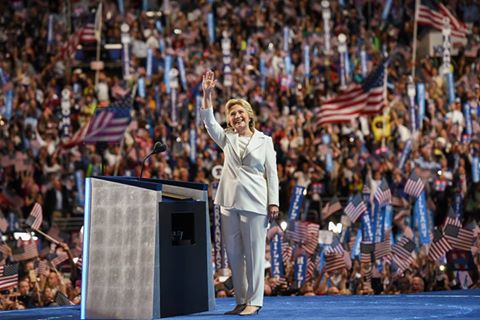 Hillary Clinton  makes history by accepting her role as the first female nominee of a major political party, Clinton is offering herself as the epitome of steady leadership to a nation that is anxious and looking for reassurance.

I will be a president for Democrats, Republicans, and Independents. For the struggling, the striving and the successful…for all Americans

“It is with humility, determination and boundless confidence in America’s promise that I accept your nomination for President of the United States,” Clinton said to thunderous applause at the Wells Fargo Center in Philadelphia.

“I accept your nomination for president of the United States!” —Hillary https://t.co/3Ffpf7W4Vz

Describing Hillary Clinton as the “most qualified” candidate to succeed Barack Obama in the White House, top Democratic women lawmakers have said the country is “ready to make history” by electing her as the next president of the US.

“They (Clinton-Kaine) will win in November. We will fight to restore Democratic majorities in the Senate and the House, and I tell you this: We can do it,” Congresswoman Nancy Pelosi, who was the first ever woman speaker of the US House of Representatives, yesterday said in her address to the Democratic National Convention here.

“To all of you whose hard work brought us here tonight and to those of you who joined our campaign this week,” Hillary Clinton said, “what a remarkable week it’s been.”

Clinton quickly reached out to disappointed Bernie Sanders voters, saying “I want you to know, I’ve heard you. Your cause is our cause.” And she took an early swipe at Republican nominee Donald Trump.

She told Americans the nation is facing a “moment of reckoning” as powerful forces try to tear it apart.

“Powerful forces are threatening to pull us apart,” she said. “Bonds of trust and respect are fraying. It truly is up to us. We have to decide whether we all will work together so we all can rise together.”

Earlier several top Democratic woman lawmakers urged Americans to help them elect the first female president of the US.
“Families of America, it’s time to suit up. With ourlipstick on. With our shoes polished. Our shoulders squared. Ready to fight.

To put Hillary in the White House. Because we know she’ll be carrying the torch for all of us,” said Senator Barbara Mikulski.Senator Patty Murray said Clinton is a leader who knows how to stand her ground, fight for what’s right and move the country forward.”Her opponent might have built buildings and casinos. But Hillary’s life work has been building the foundation of an economy that works for everyone,” said Senator Maria Cantwell.

Senator Amy Klobuchar said Clinton is a friend who takes the call, the mom who gets it done right. According to Senator Claire McCaskill, Clinton has the intelligence and the work ethic.”But most importantly, she has heart to lead this country,” she said.

“For 25 years, she’s been on the receiving end of one attack after another. But she doesn’t back down. She doesn’t whine. She doesn’t run to Twitter to give people nasty nicknames. And she sure as heck doesn’t quit. Hillary just keeps right on fighting for the people who need her most,” she said.

“In crisis or in calm, whether we need a hand or a heart-to-heart, we can always count on her to come through,” said Senator Barbara Boxer.