President Obama charmed the crowd as he took down Donald Trump and made a solid case for Hillary Clinton on Day 3 of the DNC in Philly.

“By so many measures, our country is stronger and more prosperous than it was when we started.”

President Obama narrated his legacy as he recounted the challenges his administration overcame in his two-term presidency including securing LGBT rights, seizing Iran’s nuclear weapons, doubling the production of clean energy, lowering unemployment and turning around the recession. He went over his legislative conquests while saying there’s still a lot of work to be done.

“This is a more fundamental choice – about who we are as a people, and whether we stay true to this great American experiment in self-government.”

Obama paints a bleak picture of the choice to come before American’s in November. Speaking with his trademark optimism, his tone darkens as he pleads that this is not a typical election and is instead, something much more elementary in nature. “What we heard in Cleveland last week wasn’t particularly Republican – and it sure wasn’t conservative. What we heard was a deeply pessimistic vision of a country where we turn against each other, and turn away from the rest of the world. There were no serious solutions to pressing problems – just the fanning of resentment, and blame, and anger, and hate.”

“There has never been a man or a woman more qualified than Hillary Clinton to serve as President of the United States of America.”

Obama told the crowd before him that he had a “front-row seat” to Hillary’s intelligence, judgement and discipline as she worked as Secretary of State. Remarking that nothing prepares one for the Oval Office, he reminded everyone that Hillary has been on that room and has been a part of the decisions made in that office.

ALSO READ: The US elections explainer, all you need to know

“I know plenty of businessmen and women who’ve achieved success without leaving a trail of lawsuits, and unpaid workers, and people feeling like they got cheated.”

President Obama came down hard on Donald Trump as he questioned Trump’s abilities. “Does anyone really believe that a guy who’s spent his 70 years on this Earth showing no regard for working people is suddenly going to be your champion? Your voice?”

Slamming Trump’s campaign slogan, Obama cleared up the choice for the people. Responding to Trump’s suggestion that America is weak, he illustrated how Trump is out of touch with the American public and with America itself as he said Trump must not “hear the billions of men, women, and children, from the Baltics to Burma, who still look to America to be the light of freedom, dignity and human rights.” He went on to show how Donald Trump is selling Americans short by offering fear and slogans, asking them to reject him – “We are not a fragile or frightful people.”

“Hillary Clinton is that woman in the arena. She’s been there for us – even if we haven’t always noticed.”

After a lengthy outline of Clinton’s plans versus those of Donald Trump, Obama likened Hillary to Roosevelt’s proverbial man in the arena.

“And if you’re serious about our democracy, you can’t afford to stay home just because she might not align with you on every issue. You’ve got to get in the arena with her, because democracy isn’t a spectator sport. America isn’t about “yes he will.” It’s about “yes we can.” And we’re going to carry Hillary to victory this fall, because that’s what the moment demands.”

“I’m ready to pass the baton” 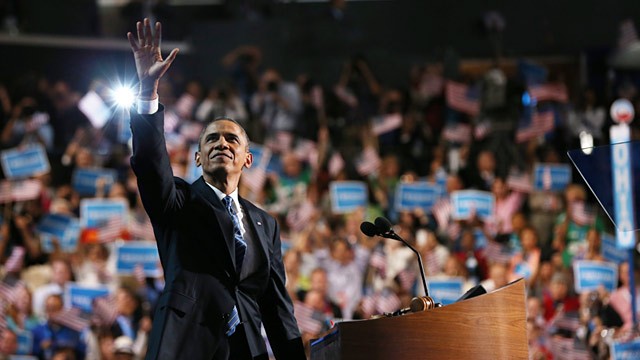 Obama rounded off his wholesome, optimistic and powerful endorsement of Hillary Clinton by asking citizens to “reject cynicism, reject fear, to summon what’s best in us; to elect Hillary Clinton as the next President of the United States, and show the world we still believe in the promise of this great nation”.