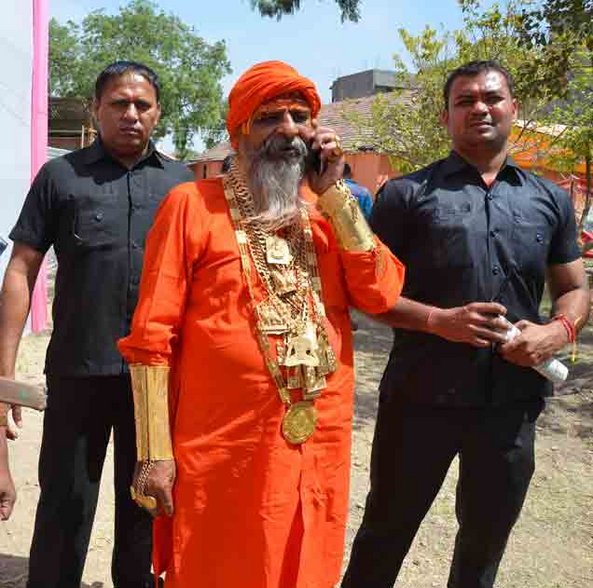 ‘Golden Baba’ is a must visit  along with the holy site where every kanwaria is en routed to.  Almost every kanwaria travelling to Haridwar these days has heard of this god man and wants to have his darshan.

The ” monastic”, after all, is a mobile jwellary shop, adorning his we3ll built physic with glittering gold lockets, armbands that have precious stones embedded in them, rings in all fingers that weigh a total of 12.5 kg — worth about Rs 4 crore — with a specially crafted diamond watch thrown in that costs an additional Rs 27 lakh.

Kanwarias as well as other curious bhakts wait for hours to catch a glimpse of him as he halts at various cities and towns on the yatra route.  Secured by a ring of 25 policemen around him, this baba claims such a fan following which is catching a lot of eyeballs.

Presently this Baba is stationed in Meerut. The godman, whose real name is Sudhir Kumar Makkad said that this was his 24th kanwar yatra. He was a garments businessman in Delhi but realized one day that he has committed a lot of sin. To repent his sins he chose to become an ascetic and started helping the needy. He claims to have married  off at least 200 girls and bear the entire cost. The gold he wears has pictures of gods and goddesses carved on them. All of this has been given to me by my followers.

The Godman, had fetish towards gold since he use to earn. Now that he has devoted his life for his followers, they donate him these gold. The followers knows that he has liking towards gold.

The followers have executed a vast ‘bhandara’ on Wednesday on the occasion of his 54th birthday.
Also Read: Hillary makes history as first woman White House nominee
ShareTweetGoogleWhatsappPrint
Mail