Home Music & Entertainment Too hot to handle! Akshay Kumar has a cameo in Dishoom 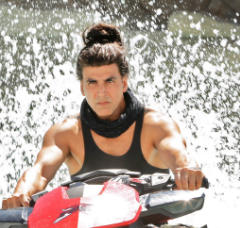 Akshay Kumar has taken us by storm by disclosing about his cameo in action-adventure film ‘Dishoom’.

Akshay has shared the image on his FB timeline and on his Instagram page; perfectly chiselled Akshay can be seen sporting black vest and a man bun, riding a jet-ski. He wrote, “A cameo I had a ball shooting for. Wishing all the luck to my friends Sajid, John Abraham, Varun Dhawan and Jacqueline Fernandez. Pack a punch with #Dishoom” along with the image. Check below-

A cameo I had a ball shooting.Wishing all the luck to my friends Sajid,John,Varun & Jacky!Pack a punch with #Dishoom pic.twitter.com/M3ptXHdrpX

Don’t you think we must give him full marks for donning that man bun? Woah!

John Abraham and Varun Dhawan can also be seen sporting neon orange underwear. Too much hotness in one film (Release date- July 29)!

The producers of the film have been cautious to prevent an online leak and have therefore, submitted the film in encrypted format to CBFC for censoring.

Mukesh Bhatt, President of the Film and Television Producers Guild of India was quoted saying, “The producers of John Abraham and Varun Dhawan-starrer Dishoom are in the process of obtaining ‘John Doe’ order (order against anonymous entities) from the Bombay high court, directing Internet Service Providers (ISPs), Telecom Operators and other platforms to ensure that any illegal content from ‘Dishoom’ is not made available on their services”.

Akshay Kumar is currently busy with his upcoming project ‘Rustom’, scheduled to release in August.