Baba Ramdev and his antics in the recent past have taken everyone by surprise. His rags to riches story is among those million of things which make him different from others. To shock all of us yet again, the successful yoga guru and businessman showed up for a cameo performance at a charity football match in Delhi’s Jawaharlal Nehru Stadium on Sunday night. 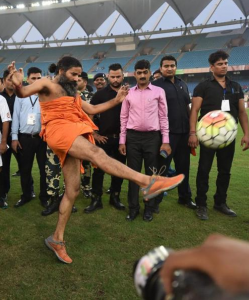 The Yoga guru was at the stadium and he was sporting a saffron dhoti and matching footwear during the charity match between country’s parliamentarians and Bollywood stars. 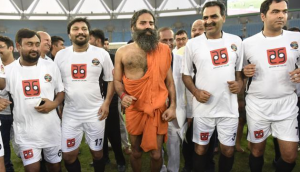 He supports the Prime Minister and he was at the event to support some of Prime Minister’s causes. He is promoting Prime Minister Narendra Modi’s two projects — the Swachh Bharat Mission and the Beti Bachao, Beti Badhao campaign for girl child empowerment.

“Baba Ramdev is a health enthusiast and football promotes good health. So he agreed to become the brand ambassador for the match,” the yoga guru’s communication advisor, Shantanu Gupta has said. 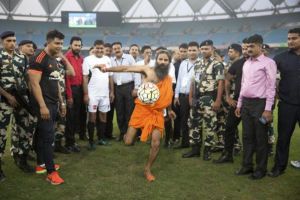 The parliamentarians were led by minister of state for heavy industries Babul Supriyo. Former Indian football captain and Trinamool Congress MP, Prasun Banerjee was also part of the team where Baba Ramdev participated.