Home Global Traveler Eagle tries to fly away with boy at bird show in Australia
ShareTweetGoogleWhatsappPrint
Mail
During a show at Alice Springs Desert Park, in Australia, a wedge-tailed eagle performed an “act” like none other, when it tried to fly away with a small boy.
According to onlookers, the soaring bird came straight for the boy, assuming him to be a “small animal prey”, and I tried to pick him up while latching onto his hood. 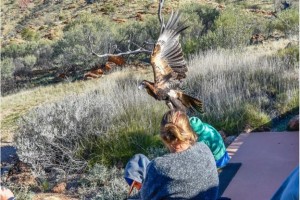 The boy, who is believed to be between 6 and 8 years of age, kept screaming and was left crying and slightly injured after the strange encounter with the hunter bird. 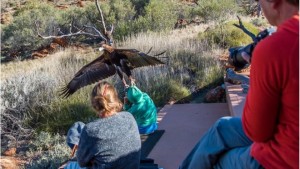 One of the audience members who were sitting close by, Christine O’ Connell, managed to capture a few pictures of the incident, and said that another person sitting further up close to the boy said that the little boy “kept running his zipper up and down,”  which may have been the reason he caught the bird’s attention.

Not the sharpest photo but lucky just to snap it. At a nature park in Alice Springs we decided to go to a bird show the young boy in the green kept pulling his zipper up and down. For some reason the Wedge Tailed Eagle did not like it and instead of flying over to the log he is meant to for a photo opportunity he flew straight at the young boy and attacked him. The show was quickly cancelled and the boy taken off to first aid. Those talons are huge he was a very lucky young boy.

The boy was left with a superficial mark gash on his face, and few other minor injuries.
Another spectator, Keenan Lucas, told the media, “We’re at the bird show in the afternoon, having a great time and looking forward to seeing the wedge-tailed eagle come out for the finale. “The bird then flew over the crowd and tried to grab on to a young boy’s head. He screamed, the mother was distraught and the presenters wrapped up the show very quickly.” 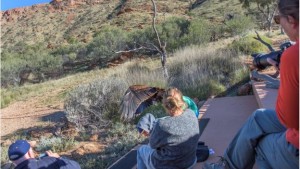 The park also issued a statement to the media after the shocking event.
In an incident occurred at the Alice Springs Desert Park where an eagle made contact with an audience member,” the park said in a statement.
“A thorough investigation regarding the circumstances behind this incident is under way and the eagle will be removed from the show while this investigation is ongoing.”
ShareTweetGoogleWhatsappPrint
Mail