Home World Why Leshia Evans is the Internet Viral sensation 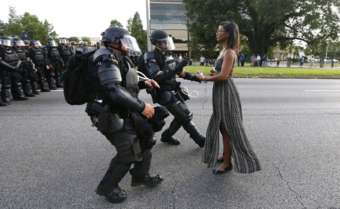 Protests have dogged the United States, following violent incidents involving African Americans and the police.
On Sunday, dozens of protesters were arrested in Baton Rouge, Louisiana, where a black man was killed by police last Tuesday.
In an atmosphere of heightened racial tension, and amid growing debate over the seeming one photo has stood out and has gone viral on social media.
It was taken by Jonathan Bachman, a New Orleans-based photographer who has been working for Reuters in the past few days.
The image shows Leshia evans, a young woman in a dress standing calmly in front of two police officers wearing layers of armour, and just walking ahead. It demonstrates a sense of resilience which has got the social media abuzz. What do you think about this picture do post your comments.