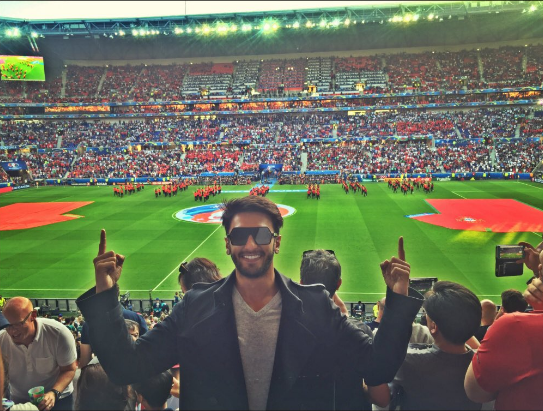 The ongoing Euro 2016 has us all hooked. And superstar Ranveer Singh is no different. To make his 31st birthday special he flew down to Paris to catch the Wales Vs Portugal semifinal match as a gift.

On the other part of the personal affair, Ranveer Singh and Deepika Padukone may not have opened up about their rumoured relationship as yet but the two often drop casual hints that speak volumes.

According to the report, the  latest buzz is that, the Bajirao Mastani stars are secretly engaged to each other.

The report suggested that two shared rings in the presence of their parents a few months ago and are set to tie the knot soon. Ranveer shared a picture of him smiling from ear to ear in the stadium with the apt caption, “Yyyyup!!! #WalesVsPortugal #EURO2016 it’s ELECTRIC out here!!! #HappyBirthdayRanveer.”