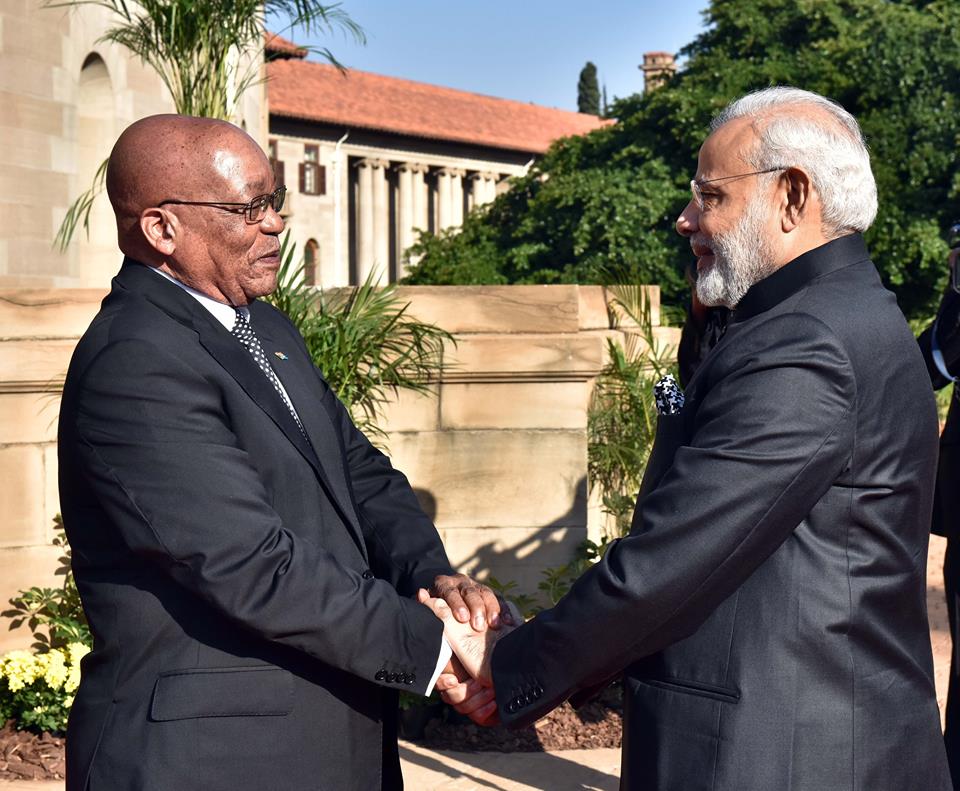 Pretoria: Ratcheting up their traditional ties, India and South Africa agreed to deepen engagement in key areas of defence production, manufacturing, mining and minerals while vowing to cooperate “actively” in combating terrorism and dealing with issues at multilateral fora.

After extensive talks with South African President Jacob Zuma, Prime Minister Narendra Modi projected India as an attractive destination for manufacturing of defence equipment and platforms and said both countries can join hands in not only meeting needs of each other but also to respond to regional and global demand.

South Africa is a major player in defence production globally.

During the meeting, Modi thanked President Zuma for South Africa’s support to India’s membership bid to the Nuclear Suppliers Group.

“We know that we can count on the active support of our friends, like South Africa,” he said. There were reports that South Africa was among countries which had reservations about India’s bid to join the 48-nation grouping.

Holding that ties between India and South Africa have been a story of strong advances and concrete achievements, Modi said there was potential to ramp up cooperation in trade and investment, especially in areas of minerals and mining, chemicals and pharmaceuticals, manufacturing and information technology.

In a joint press interaction with Zuma, Modi invoked Mahatma Gandhi and said he belongs as much to India as to South Africa.

“For me personally, this visit is an opportunity to pay homage to two of the greatest human souls to have ever walked this Earth – Mahatma Gandhi and Nelson Mandela,” said Modi.

Talking about combating terrorism, Modi said it attacks the very foundations of society and that both countries agreed to combat it with active cooperation.

“Terrorism is another shared threat that puts at risk the safety and security of our people. It attacks the very foundations of our society. The President and I agreed that our two nations need to stay vigilant and cooperate actively to combat terrorism, both in our region and in the world,” he said.

Referring to opportunities in the defence and security sector, Modi said companies from both countries can pool their capacities to jointly develop or manufacture defence equipments and platforms.

“Beyond economic ties, and links of business, trade and investment, we can also partner in the field of defence and security. Both, at the level of industry and for our strategic and security needs,” he said.

He said defence sector in India is one of the sectors witnessing a complete transformation and that it offers exciting opportunities.

“Our companies can also pool their capacities to jointly develop or manufacture defence equipments and platforms.And, not just to meet our defence needs, but also to respond to regional and global demand,” he said.