In the big UEFA Euro 2016 clash Germany defeated Italy 6-5 in a marathon shootout featuring 18 penalties to finally end their jinx against their old rivals in major tournaments to reach the semi-finals on Saturday.

They will now face the winners of the other quarter-final between hosts France and Iceland, who play on Sunday.

After a tense, tactical battle ended 1-1 after extra time, the usually clinical Germans missed three spot kicks but still progressed courtesy of even more wayward shooting by their opponents who failed to convert four of their penalties.

Jonas Hector had the honour of sending Germany through by putting away their ninth kick but even his effort only just made it under Gianluigi Buffon’s dive.

“It’s difficult to find the words. I’m overjoyed that the ball went in,” said Hector.

“I can’t describe the feeling. I took my heart in my hands and just wanted to knock it in.”

Germany coach Joachim Loew added: “I congratulated him (Hector). It was a very special situation. I had a good feeling when he was taking his (penalty) shot.”

Check out every penalty of an epic shoot-out!
Here’s how @DFB_Team_EN​ reached the #EURO2016 semi-finals!#GERITAhttps://t.co/KdYVesIRNW

Mesut Ozil had given Germany the lead midway through the second half before Leonardo Bonucci replied with a penalty following a bizarre handball by Jerome Boateng.

Germany, who reached their sixth successive semi-final in a major tournament, had never previously beaten Italy at a major finals – a run stretching back to the 1962 World Cup.

Italy’s four wins included a World Cup final and two semi-finals and the Euro 2012 semis. The other four games were drawn. 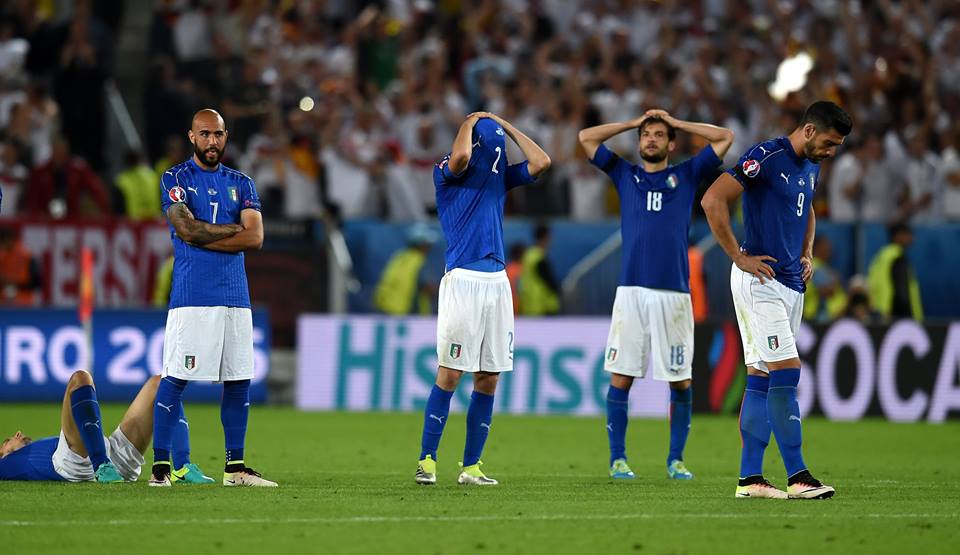 The first half was as tense, tactical and cagey as expected between two teams who had only conceded one goal between them so far in the tournament.

Both sides began with three-man defences, although Italy also pulled wing backs Alessandro Florenzi and Mattia De Sciglio into the back line every time they sensed danger.

It took 42 minutes for either side to produce a genuine chance but Germany forward Thomas Mueller, usually deadly in front of goal, scuffed his shot and Buffon saved easily.

Germany’s passing was slicker and they broke through in the 65th minute when Hector’s pass into the area was deflected off Bonucci and fell perfectly for Ozil to guide into the net.

It seemed that might be enough to win the game but Italy equalised out of the blue 13 minutes later.

Florenzi curled the ball into the area, Boateng went up for a challenge with Chiellini with his arms raised like a basketball player and the ball hit the German’s arm.

Italy suddenly found a new lease of life as Graziano Pelle had a shot deflected wide following a quick break and De Sciglio fired into the side-netting.

Little happened in extra time but the shootout was eventful. Simone Zaza, Pelle, Bonucci and Matteo Darmian missed for Italy, while Mueller, Ozil and Bastian Schweinsteiger fluffed their lines for Germany but Hector stepped up to seal the win.