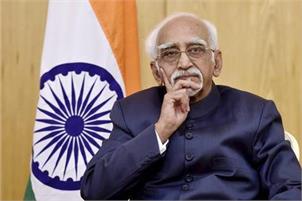 Vice President Hamid Ansari has described his visit to Morocco and Tunisia as satisfying, having covered various issues of bilateral and international interest, including trade, terrorism and economic relations.

Talking to the media on board his special aircraft during the return flight from Tunisia to New Delhi, he said, “It was a good visit and we held good discussions on various issues in Morocco and Tunisia. Substantive matters were discussed in both the countries.” “I came with a stretched out hand of friendship for both the countries, but I found their hands were also stretched towards us,” the Vice President said.

He said that in both the countries fruitful discussions were held on various matters of mutual interest, including economic, tourism, IT and allied sectors. Ansari said that tourism is the main activity resulting in economic upliftment for both the country, but is affected by terrorism due to which number of tourists coming from Europe is declining.

“Once these countries succeed in rolling back terrorism, then tourism flow will improve with increased numbers from European countries,” the Vice President said. He said that it is natural for them to go in for.

He said that it is natural for them to go in for revival of tourism in order to move ahead economically. He said that reception accorded to him and his delegation in both the countries was very warm and very friendly. Some new initiatives have been taken in West Africa and both countries are close to the West African region.

“If triangular tie-ups (between North Africa, West Africa and India could be initiated it could be beneficial for all,” he added. Ansari noted that that visit at the level of the Vice President has taken place after many years. “Even at the level of the Prime Minister, the visits have been few.

My trip was carefully planned so that India and both the countries benefit.My trip has been satisfactory,” the Vice President who returned home today after concluding his five-day visit to Morocco and Tunisia said.

On the issue of terror, he said that they (North African countries) were themselves major victims. “Terror is a menace which has to be curtailed by all at the world level and bilateral level.