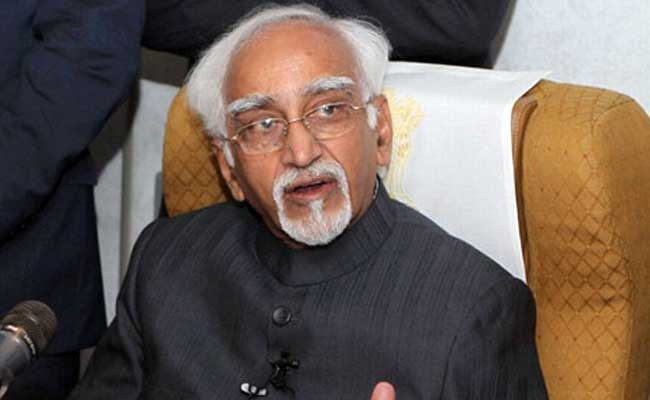 Rabat: In a clear message as he landed in Africa on his trip to Morocco and Tunisia, Vice President Hamid Ansari condemned the killing of an African student in India.

“It is despicable, They are guests in the country we need to look after them, the Indian Vice President who is a former diplomat said on board Air India one.

We greatly value our relationship with Africa no country in the world has stood with Africa like India, India was at the forefront of decolonisation,” he said.

We have older relationship with Africa than China

Asked on the rivalry between the two Asian Giants India and China, Ansari said, “We are not competing with China our capacities are different. China has just entered we have old relationship telemedicine and It we thought about it much earlier,” he said.

During his four day trip Ansari will visit Morocco and Tunisia and the trip comes at a time when India is making a renewed push to engage Africa.

Ansari’s visit “will build on diplomatic gains” from the India-Africa summit and “we have chosen these two countries as they are great examples of democracy”, Secretary (Economic Relations) in the MEA Amar Sinha had said.

The King of Morocco had set the ball rolling when he came here in October, Mr. Sinha said. The New Delhi Summit — of which Morocco’s King Mohammed VI was the first confirmed guest — was the largest political conference in modern history connecting Indian and African leaders.

He said it is the first high-level visit to the African country after Prime Minister Atal Bihari Vajpayee went there in 1999.

“At the level of Vice-President the visit comes after 50 years,” he had said, noting that it is the 50th year of Morocco’s independence.

“Hello Africa, Tell me how are you doing?” will be India’s motto for the continent, he had said, adding, there will be a series of visits by Indian leaders to Africa in the coming days.

Both the countries are looking forward to the visit as they are key partners in food security and fertilisers and investments in private sector.

“Our car and truck manufacturers are looking at prospective markets,” he said.

While Morocco’s trade with India is “substantial”, there is scope for increasing it with Tunisia. “Morocco is a developing destination for Indian film industry,” he said.