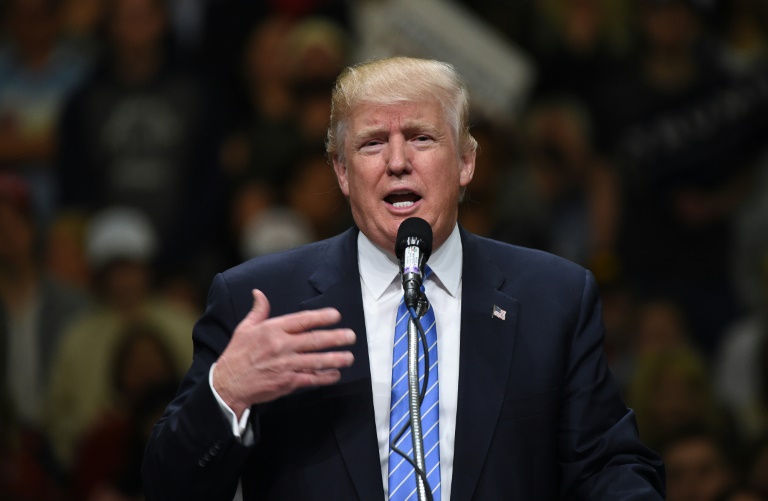 Donald Trump claimed Thursday to have secured the support of enough delegates to become the Republican presidential nominee, vaulting past the threshold of 1,237 needed to win the party’s primary race.

The accomplishment caps an extraordinary rise by a political neophyte whose campaign was widely derided as a distraction last June when he first announced his candidacy.

Trump eventually swept 16 Republican rivals aside, and early this month was left as the last man standing when his remaining two challengers dropped out of the race.

“The folks behind me got us right over the top from North Dakota,” Trump said at a press conference in Bismarck, standing onstage with some 15 unbound delegates from the midwestern state who committed their support to the real estate tycoon.

Several US media outlets, citing their own analysis of pledged delegates and unbound delegates who announced their commitment to Trump, said earlier Thursday that Trump reached or surpassed the 1,237 mark.

The Republican Party will not make the delegate results official until its national convention in July, when delegates actually cast their votes for the nominee.

According to the US news agency the Associated Press which first reported Trump crossing the threshold, Trump now has the backing of 1,238 delegates.

It said the real estate tycoon’s delegate count rose when some unbound Republican delegates, including Oklahoma party chairwoman Pam Pollard, said they would support him at the convention.

ABC News reported that Trump has now secured 1,239 delegates, while CNN lifted its Trump delegate estimate to 1,237 Thursday, citing unbound delegates who said they would back the billionaire.

Trump was already the Republican presumptive nominee, following a spectacular and unlikely run for the White House that has thoroughly upended American politics.

He was assured of reaching the magic number at the latest on June 7, when California and four other states vote on the final day of the Republican primary race.

But turmoil continues to dog his campaign, while Republicans grapple with bitter divisions within their party.

Speaking in Japan, US President Barack Obama launched a broadside against Trump, telling reporters that world leaders are “rattled” by some of his policies and blasting his “ignorance” of how the world works.

The provocative Republican has struggled to win the support of key figures in his party establishment, including House Speaker Paul Ryan, who have voiced concern about the presumptive nominee’s tone and his lack of policy specifics.

Ryan, the nation’s top elected Republican, has declined to endorse Trump yet. They met two weeks ago to discuss ways to unify the party behind his presidential run.

But on Thursday, after a “productive” phone call with Trump, Ryan again stressed he wanted to see more unity in support of the candidate before endorsing him.

“What I’m most concerned about is making sure that we actually have real party unity, not pretend party unity,” Ryan told reporters in Washington.

The former reality TV star has dominated headlines since launching his presidential campaign last year with a mix of incendiary comments and policy stances seen as insulting Mexicans, Muslims and women among others.

He has proposed building a giant wall along the US border with Mexico to keep out illegal immigrants, and called for a ban on Muslims entering the United States.

Trump has also raised eyebrows by continuing to attack members of his own party. On Tuesday he assailed popular New Mexico Governor Susana Martinez — someone who could help him win over both Hispanics and women — saying she was not doing a good job as governor.

And the business mogul has shown his national political director Rick Wiley the door just six weeks after hiring him.

Wiley, who ran Wisconsin Governor Scott Walkers’s ill-fated presidential campaign, “was hired on a short-term basis as a consultant until the campaign was running full steam,” Trump’s campaign said Wednesday.

Trump’s likely Democratic rival in the general election, former secretary of state Hillary Clinton, is set meanwhile to lock in the nomination following the June 7 primaries.