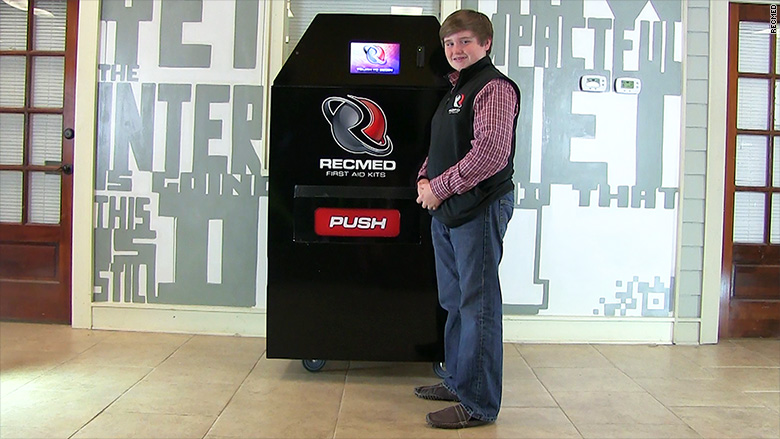 According to the reports this young entrepreneur was very confident about his idea of business at TechCrunch Disrupt this week in Brooklyn. Taylor was ecstatic  to ever get accepted to the event. He felt awesome says, report.

Rosenthal’s startup RecMed, which he launched in 2015, has already been generating buzz. He’s raised $100,000 in angel investments and has already rejected a $30 million offer to buy his idea.

His project started as an eighth-grade project when Rosenthal was one of 19 students in a Young Entrepreneurs Academy class.

He came up with the business idea,  The straight-A student, who’s a first baseman and pitcher for his high school baseball team, had one immediately. He remained  worried about kids  getting hurt and parents couldn’t find a band-aid. Report says he wanted to solve that problem forever.

His initial thought was to set up a pop-up shop at the tournaments to sell first-aid kits. He tried it and quickly realized it wasn’t the best model. The time and money involved were much more. Then the vending machine idea struck his mind.

Rosenthal sketched a design and consulted with his parents, both of whom work in the medical industry. By December, he had a working prototype and had acquired a patent.

Users pick from two options: prepackaged first-aid kits for dealing with issues like sunburns, cuts, blisters and bee stings (they run from $5.99 to $15.95). You can also buy individual supplies like band-aids, rubber gloves, hydrocortisone wipes and gauze pads, which cost $6 to $20.

The young entrepreneur hopes to start deploying the machines this fall. He already has an order from Six Flags for 100 machines. Rosenthal is open for advertisements on the vending machine as he plans to make money by selling it as well as advertising  his innovation.

According to the reports ,Clarinda Jones, Rosenthal’s teacher in the Young Entrepreneurs Academy. She’s proud of his entrepreneurial flair.