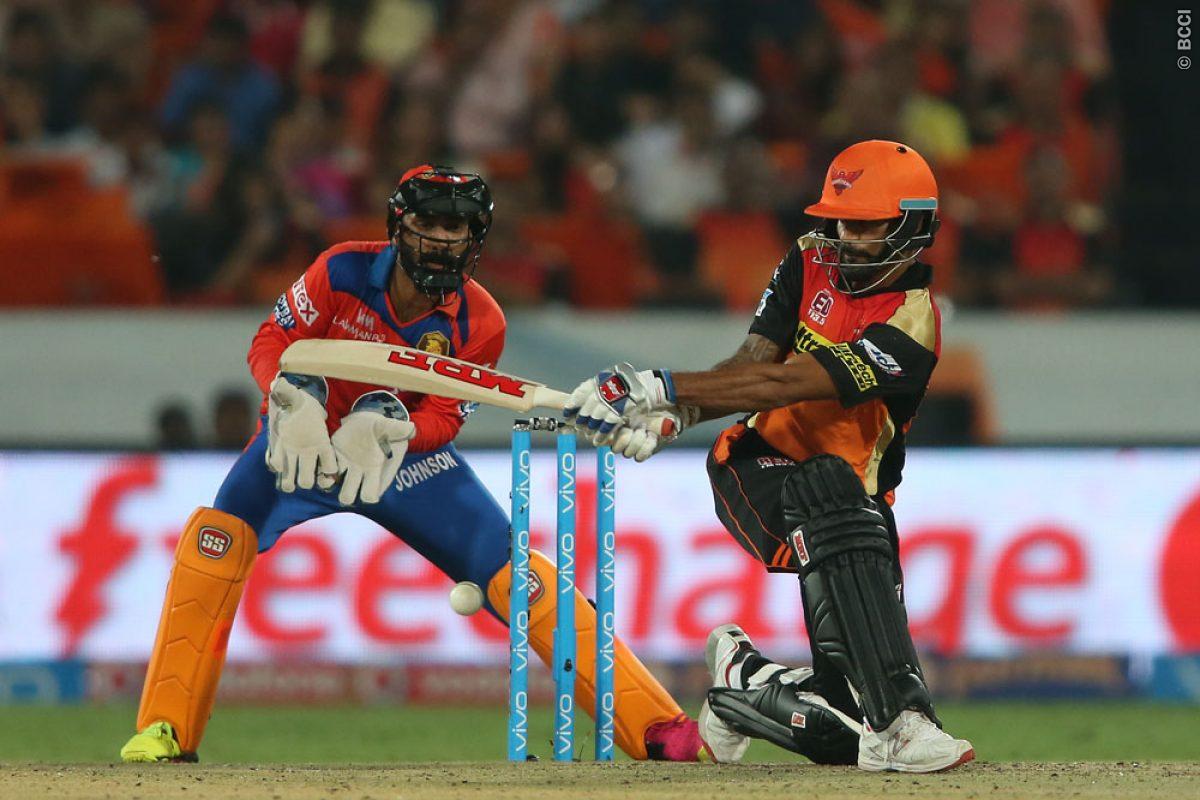 Hyderabad: Shikhar Dhawan struck an unbeaten 47 after a clinical display by his bowling team-mates as Sunrisers Hyderabad beat Gujarat Lions by five wickets in their IPL match on Friday.

Chasing 127 for a win, opener Dhawan dropped anchor as he carried his bat through the innings as the Sunrisers chased down the target with six balls to spare at the Rajiv Gandhi International Stadium.

Dhawan played second fiddle to his batting partners initially before opening up later on to take his side home. He hit six fours in his solid 40-ball unbeaten innings, including the winning shot which was also a boundary as the Sunrisers reached 129 for 5 in 19 overs.

This was after Sunrisers’ bowlers produced a clinical display to restrict the Lions to a meagre 126 for 6 after being put into bat.

Pacers Mustafizur Rahman (2/17) and Bhuvneshwar Kumar (2/28) led an impressive bowling show while Barinder Sran and Moises Henriques took a wicket apiece as the Sunrisers bowlers bowled a disciplined line and length. Senior pacer Ashish Nehra (0/23) and Bhuvneshwar bowled a maiden over each as the Lions took 14 balls to score their first run, the most in IPL history.

ALSO READ: Floor test in U’khand to be held on May 10: SC

Sunrisers though made a heavy weather of a small chase as they lost wickets in regular intervals but Dhawan ensured that the home side notched up their fifth win in eight matches and jumped to the fourth spot in the league table with 10 points.

The Lions suffered their third loss on the trot — and fourth so far overall — and they remained on the second spot with 12 points from 10 matches. The Sunrisers had beaten the Lions in the first leg also.

Captain and opener David Warner (24) gave the Sunrisers a rollicking start as he took 16 runs from the second over bowled by Pradeep Sangwan, hitting the bowler for two sixes.

But Warner, who hit a magnificent 92 off 50 balls in Sunrisers’ 15-run win over RCB in their last match, did not last long today as he was out in the fourth over off the bowling of Dhawal Kulkarni. Warner mistimed his hit and Praveen Kumar took an easy catch at mid-on. The Sunrisers captain hit one four and two sixes in his 17-ball knock.

ALSO READ: Meet the man of the match Abram

Kane Williamson (6) hit a four off Kulkarni as soon as he came in but fell to Praveen Kumar in the fifth over. The home side reached 38 for 2 after the powerplay overs and Moises Henriques (14) fell in the 10th over with Bravo getting the wicket with his second ball.

Yuvraj Singh came out to play his first match this season but disappointed as he could score just five runs off 14 balls. He fell to Kulkarni with Sangwan taking the catch.

Meanwhile, Dhawan was getting stronger after keeping quiet initially. He began to open up and took his side’s score nearer to the target. Deepak Hooda was out in the 18th over but Dhawan remained till the end to take his side home.