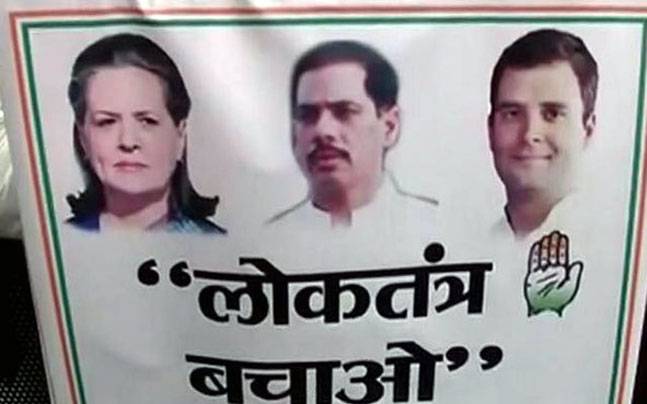 New Delhi/Jaipur: Guess who is the latest poster boy of India’s grand old party? It’s the son-in-law of party president Sonia Gandhi, who made his debut on posters waved by Congress workers at the Save Democracy March, called in the middle of the AgustaWestland controversy at Jantar Mantar on Friday.

While Vadra himself did not make it to Jantar Mantar, the entire Congress leadership, including Sonia, Rahul and former Prime Minister Manmohan Singh spoke at the rally.

In response to the poster with Vadra’s face being used in the march, the BJP called the ‘Loktantra Bachao Yatra’ (democracy march) a ‘dynasty march’, adding it is a march to save the dynasty from extinction.

Meanwhile, the Enforcement Directorate (ED) on Friday conducted searches at multiple locations in Rajasthan in connection with its money laundering case arising out of a case of land grab in Bikaner involving a company allegedly linked to Robert Vadra.

Officials said the searches were conducted in at least seven locations in the border town of Bikaner on Thursday and the action has now ended.
ED teams examined documents allegedly related to Vadra’s company, which purchased lands and also quizzed some people, ED spokesperson AK Rawal said.

The probe is related to the purchase of 275 bigha land allegedly by the company of Vadra, son-in-law of Congress President Sonia Gandhi, in Kolayat area of Bikaner. Vadra has denied any wrongdoing even as Congress party called the action “sheer political vendetta”.

The Government has upped the ante against Vadra. The series of raids in Bikaner may just be another tactical move to put the Congress on the backfoot but it may not serve the purpose. This strategy may backfire and dim the prospects of the Parliament functioning smoothly for the remaining days of the current Session.