Home Uncategorized Queen shows Obama she is boss, find out how? 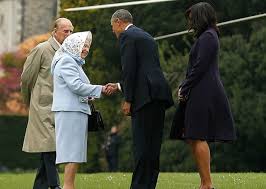 LONDON: In the United Kingdom, it’s either the Queen’s way or the highway. And US President Barack Obama, the world’s most powerful man, was no exception to this rule. During his recent trip to attend the 90-year-old monarch’s birthday celebrations, the Queen forced him to slash by half the number of choppers his Secret Service could land on the Windsor Castle.

The Queen called Obama’s bevy of choppers “over the top,” meaning the Secret Service had to rethink their plans to land about six aircraft in the 300-year-old gardens of the monarch’s residence.
The Queen said there was no chance Obama’s extensive security backup would be accompanying him to Windsor Castle. “Her Majesty refused to back down and said, ‘three helicopters only.’ The Secret Service had to go away and think about their plan. The President’s officials were told that the Queen regarded Windsor Castle as her family home and the most important of all royal residences,” the report said.
“It was a write-off, and the Queen was not amused,” Daily Express quoted a royal source as saying.
Her insistence came after Obama’s helicopters damaged the grass when half a dozen of them landed during his last visit in 2011.
“The good thing is that the President acceded to the Queen’s wishes. She rarely imposes her will but when she does people listen. It just took the US Secret Service agents a little time to realise that,” the source said.
An insider said the US aides refused to change their plans on security grounds but came around to the Queen’s wishes eventually.