India’s oldest and biggest newspapers Times of India fell prey to sensationalism disregarding sensitivities and national interest, even if it came at the cost of embarrassing a state guest of India, Kate Middleton, with a caption on its front page, ‘Kate’s Marilyn moment at India Gate’. They did that earlier with Bollywood star Deepika Padukone with a video of her cleavage tweeted in September 2014.

This is the reason why the young generation is moving away from the old world media outlets like the Times of India and in their desperation to get readers they are resorting to sensationalism. 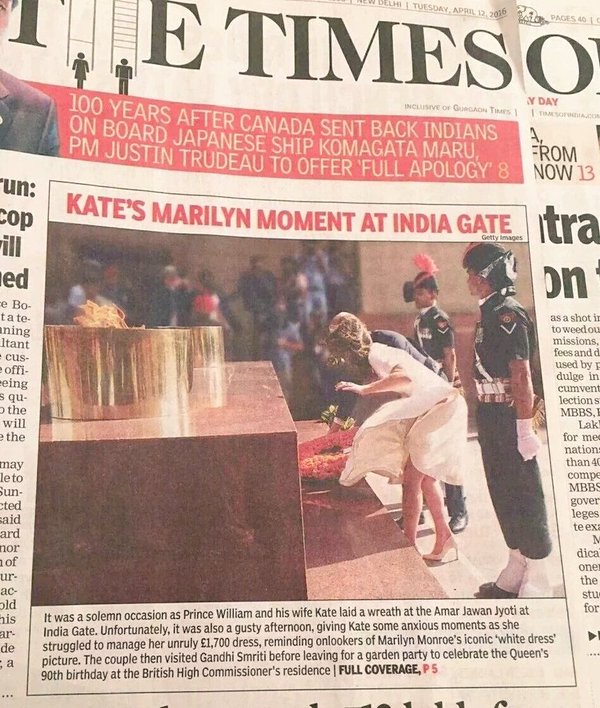 What turned out to be a slight wardrobe malfunction at a wreath laying ceremony at a war memorial became more important than the event and in a lack of poor judgement the times editors let the picture go with a caption comparing it to the Marilyn Monroe moment. Editorial judgement is a key ingredient that makes for a good media outlet and in this case the TOI let it slip away.

Prince William and Duchess of Cambridge Kate Middleton were at the Amar Jawan Jyoti, to lay a wreath on the memorial and pay their respects to the fallen soldiers. Media too was present there to cover the event and so was Times of India.

ALSO READ: ‘Lady of the Harley’ killed in road mishap

At a solemn moment at a war memorial, when everyone was giving their respect to the soldiers who had given their lives for the country, Times of India came into its element and decided to compare the moment when Kate’s dress lifted slightly due to breeze to Marilyn Monroe’s famous upskirt image.

This type of coverage by the national daily definitely did not go down well with the social media which is up in arms. It happened while the royal was laying a wreath on the war memorial.

YES!I am a Woman.I have breasts AND a cleavage! You got a problem!!??

Here are a few reactions which sum up the kind of disgust Times of India generated after doing such a story. Times Of India not only dishonoured India’s guest but also embarrassed the country.

Shame on @timesofindia for publishing Kate’s India Gate on front pg.Will Aranb discuss the shameless act of his fellow journalist@TimesNow

43% of the pictures in Times of India are about semi-nude women. The other 57% pictures are ads.