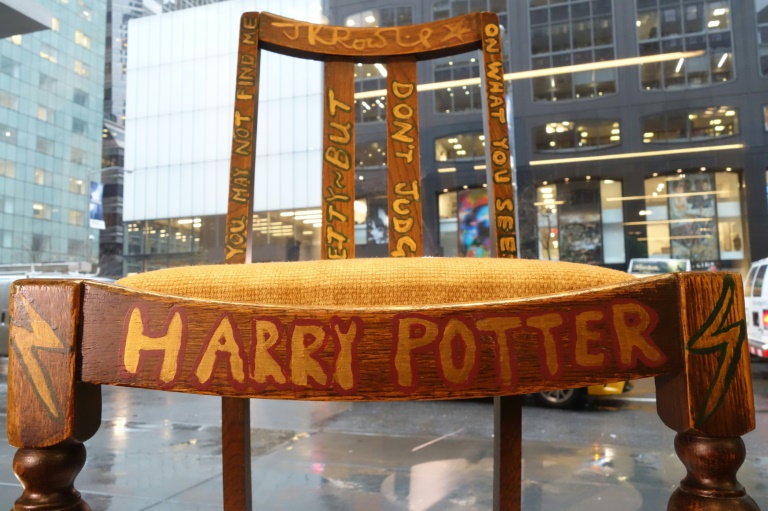 The chair on which British author J.K. Rowling sat to write the first two volumes of her best-selling “Harry Potter” series sold at auction in New York on Wednesday for $394,000.

The modest, 1930s-era oak chair was part of a mismatched set of four that Rowling was given for free when she was a single mother living in subsidized housing in the Scottish city of Edinburgh.

“This was the comfiest one, which is why it ended up stationed permanently in front of my typewriter, supporting me while I typed,” Rowling wrote in a letter accompanying the chair, said the auction house.

“My nostalgic side is quite sad to see it go, but my back isn’t,” she added.

Rowling donated the chair in 2002 to an auction benefitting the National Society for the Prevention of Cruelty to Children after adorning it with words in pink, gold and green paint.

“You may not find me pretty but don’t judge on what you see,” she wrote, along with “I wrote Harry Potter while sitting on this chair” and her signature, the auction house said.

“A small piece of history connected to the mythology of the Wizarding World and one of the most beloved characters in children’s literature,” said the auction house.

The seven-part “Harry Potter” series became a global phenomenon, translated into 67 languages. It sold more than 450 million copies and was credited with reviving children’s interest in reading.

In 2012, Forbes dropped her from its billionaire list, attributing it to Rowling’s charitable donations and high tax rates in Britain.