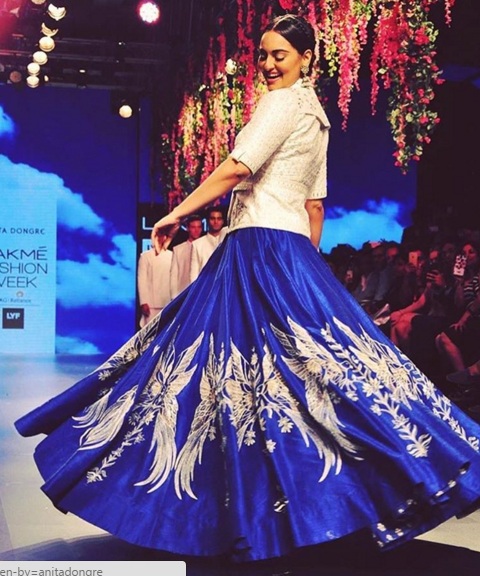 The designer showcased her collection “Love Notes”, inspired by her favourite place Rajasthan.

For the fashion week, which opened on April 29, this was one of the most gorgeous shows till now.

While Bougainvillea installations throughout the sides of the ramp set the mood for spring/summer, songs like “Aaja Re Mere Dil Bar Aaja”, “Kamli” and “Mere Laung Gawacha”, infused energy not only among the models but also in the audience, who was as happy with the show as the designer herself.

Anita captured the poignant emotion of love told through the musings of a young woman, who is exploring the changes her lover is likely to bring into her life and Sonakshi turned out to be her flawless muse in a royal blue skirt teamed up with white jacket choli, featuring designer’s signature gotta-patti work.

The 28-year-old actress, looking fitter then ever, enjoyed her runway stroll and made a grand entry escorted by the male models, dressed in all white bandhgalas with dhoti and salwars completing their look.

Dancing on “Mera Laung Gawacha”, Sonakshi was a treat for eyes. The “Holiday” actress couldn’t stop grooving and even asked the usually straight-faced models to smile and dance along with her.

“We had a great time and were so excited and did a group hug back stage. We had a lovely time walking the ramp in these beautiful creation by this wonderful lady,” she added.
She also pulled the rather shy designer to walk till the

front of the ramp calling her the star of the evening.

“Anita is one of my favourite designers and the go-to person whenever I need to dress up in tradition IndiaN wear. I have worn her in almost all of my friends’ wedding. She is the kind of designer I swear by.

“I am surprised we never worked before. This is the first time we collaborated and the results are fantastic. Every piece of this collection is something that a girl would love to wear. It’s so wearable and young,” Sonakshi said.

From palazzos, skirts to lehengas and anarkalis, the line had it all a girl would need in her wardrobe. Digital coloured prints from Rajashtan in combination with white created a delicate autocratic romanticism of the urban Indian woman.

A mix of functionality and fantasy, the line was resonating the modern woman, who is strong but feminine, opulent yet effortlessly graceful.