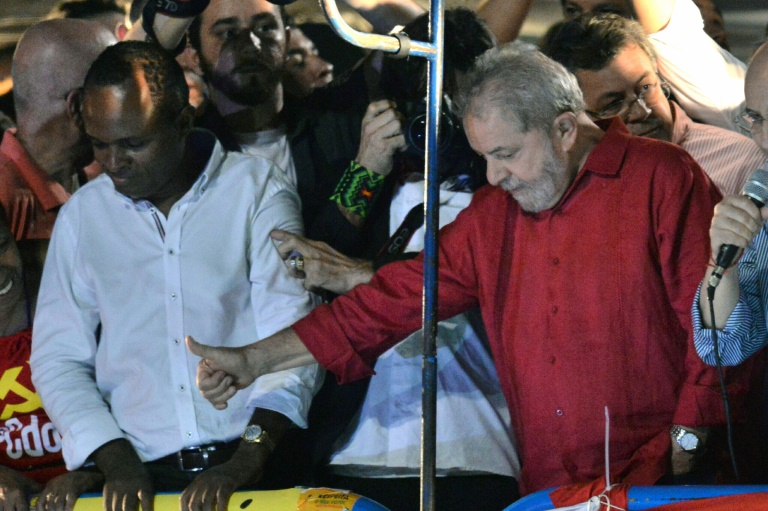 Brazil’s ex-president Luiz Inacio Lula da Silva rallied supporters against an opposition “coup” targeting his successor Dilma Rousseff, before being undercut by a high-court judge who barred him from a government position.

It was supposed to be the day the two leftists showed their Workers’ Party still retains the support that made it the dominant force in Brazilian politics the last 13 years.

First an impeachment committee in the lower house held its inaugural session on whether to recommend removing Rousseff from office.

Then a Supreme Court judge blocked Lula’s appointment as presidential chief of staff, sending a corruption case against him back to criminal court.

The judge’s decision came just after Lula addressed tens of thousands of supporters in the country’s largest city, Sao Paulo.

Waving the red flags of the Workers’ Party, the sea of demonstrators welcomed Lula with thunderous cheers when he was hoisted onto a parked truck to address the crowd.

But the ruling party’s nationwide show of force drew less than one-tenth as many people as huge protests Sunday calling for Rousseff’s ouster, according to police estimates that put the turnout at 267,000 in 55 cities across Brazil.

The president’s camp put the figure much higher, at 1.2 million — still below the three million police counted Sunday.

Lashed by a deep recession, an explosive corruption scandal, impeachment proceedings and massive protests, Rousseff is facing speculation she will not survive her second term.

Her move to make her embattled mentor her chief of staff has triggered outrage among opponents, who filed some 50 court cases challenging the nomination over allegations that Lula was seeking ministerial immunity to avoid arrest in the spiraling scandal centered on state oil company Petrobras.

Supreme Court judge Gilmar Mendes blocked the appointment until the full court can rule on its legality, barring Lula from starting work and sending his case back to crusading anti-corruption judge Sergio Moro.

Moro, the head of the Petrobras probe, caused an uproar this week when he leaked a wire-tapped phone call between Rousseff and Lula suggesting she appointed him to protect him from arrest with ministerial immunity.

The president told Lula she was sending him a document with his official ministerial appointment, to be used only “if necessary.”

Lula, who stepped down in 2011 after presiding over a watershed economic boom, is charged with accepting a luxury apartment and a country home as bribes from construction companies implicated in a multi-billion-dollar corruption scam at state oil company Petrobras.

Rousseff accuses her enemies of mounting a “coup” against her.

Lula, speaking at the rally, told supporters “We won’t accept a coup in this country.”

“It’s absurd what they’re doing to Lula, an attack on a person who has done so much for this country and its neediest people,” said 53-year-old housewife Maria do Carmo Zafonatto in Sao Paulo, where Lula launched his political career as a union leader in the 1980s.

“This is a coup by the right. That’s why I’m here, to defend democracy.”

“They want to get rid of him because they’re afraid he’ll run (for president) in 2018 and win. They’re massacring him. It’s a crime,” she told AFP.

No clashes were reported at the demos, which had raised fears of violence in a climate of soaring tensions.

On Friday morning, riot police in Sao Paulo fired stun grenades and water cannon to disperse some 150 anti-government protesters who had been camped out for nearly two days.

The ongoing protests come against the backdrop of new impeachment proceedings against Rousseff.

The newly installed congressional impeachment committee said it expected to reach a decision within a month on whether to recommend removing the president.

Its recommendation will then pass to the full chamber, where a vote by two-thirds of the 513 lawmakers would trigger an impeachment trial in the Senate.

Rousseff is accused of manipulating the government’s accounts to boost public spending during her 2014 re-election campaign, and again in 2015 to mask a deep recession.

Recent polls show Rousseff’s popularity rating is down to about 10 percent, and 60 percent of Brazilians would support her impeachment.