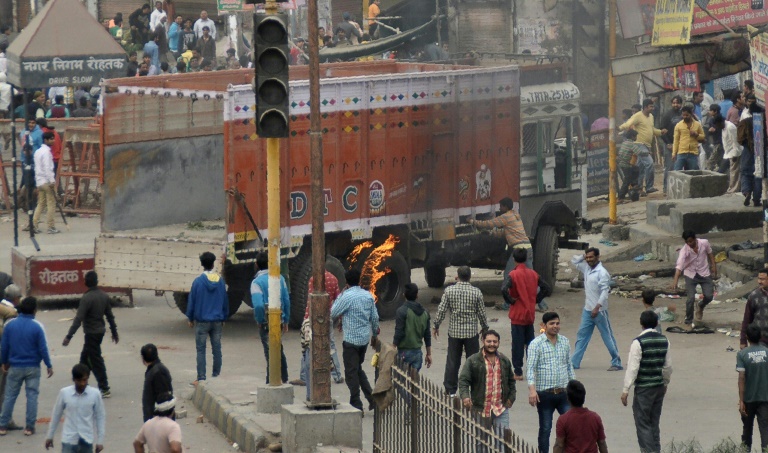 Gurgaon: The Jat agitation has entered into its fourth day and things doesn’t seem to be controlled by the authorities.

The protest being initiated in Delhi-NCR region, things are turning very difficult for the people. With many roads being blocked by the protesters, the people are stranded on roads.

In Gurgaon’s Sector 51 on Sunday, due to road block, people were forced to stranded on road and many people were bound to take shelter in Gurgaon Sector 51’s Women Police Station

There were also reports of damage to public property by the protesters, who blocked major state border entry points, including Sindhu border, Nangloi-Bahadurgarh Road, Karnal road, Tikari, Jharoda and Madhuban Chowk in the southwest and outer Delhi, creating major traffic snarls which affected many areas of the city.

Police said the situation was being brought under control even as demonstrations were held at several places, including Nangloi, Madhuban Chowk, Narela, Najafgarh.

“Several companies of Delhi Police have been deployed in Najafgarh and adjoining areas and we are trying to bring the situation under control,” said DCP (south-west) RA Sanjeev.

The protests led to the diversion of traffic with several roads leading to neighbouring Haryana having been blocked by protesters, a senior police officer said.

Heavy police deployment has been done for handling the demonstrators, he said.
There were also reports of some damage to public property, including buses, in some areas, police said.

“All the major roads are severely affected with Madhuban Chowk having been blocked by the demonstrators,” Additional DCP (Outer) Pankaj Kumar Singh said, adding, “The situation is under control so far.”

Jats in neighbouring Haryana have been agitating for the past few days to press their demand for quotas in jobs and educational institutions. The protests have been accompanied by violence with curfew having been imposed in many places and the army being called in to bring the situation under control.
The protests have disrupted normal life in Haryana’s Rohtak, Jind, Bhiwani, Jhajjar, Sonipat and Hisar districts.