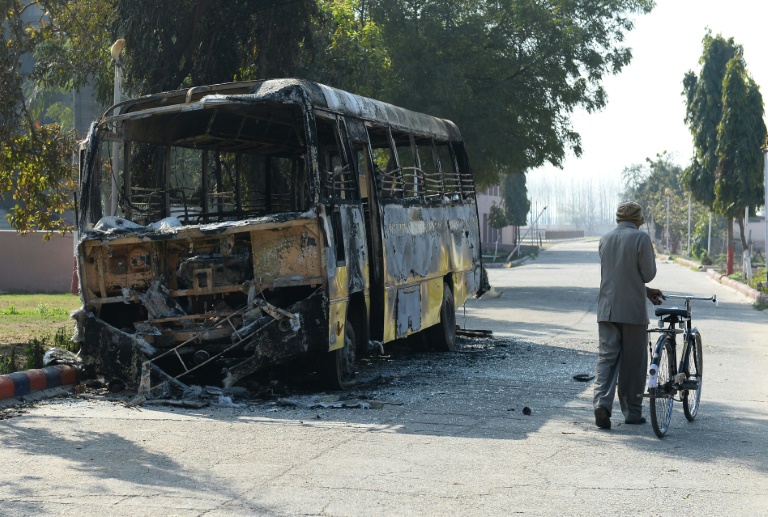 Fresh rioting and arson erupted in a north Indian state Sunday in caste protests that have left at least 12 people dead, and New Delhi faced a water crisis after mobs shut down a key supply.

Thousands of troops with shoot-on-sight orders were deployed on Saturday in Haryana state after week-long protests turned violent, with rioters setting fire to homes and railway stations and blocking highways.

At least 12 people have been killed and about 150 injured in the state since Friday, up from an earlier toll of 10, Haryana additional chief secretary P.K Das told reporters.

One person was killed in firing on Sunday and another died in a clash between two protesting groups, he said, without giving details.

The Jat rural caste is leading the protests, demanding quotas be set for Jats for highly sought-after government jobs and for university places. Caste members say they are struggling to find places despite India’s strong economic growth.

Talks were held in Delhi between Jat leaders, national Home Minister Rajnath Singh and the Haryana government run by the Bharatiya Janata Party.

Haryana BJP leader Anil Jain said the state government had now agreed to the community’s demands. “We have decided in the meeting that Jats will be given reservation through a law in the next assembly session,” Jain told reporters after the talks.

Jat leader Jaipal Singh Sangwan told AFP that they would only decide on Monday whether to call off the protests.

India reserves places for lower castes to try to bring victims of the country’s worst discrimination into the mainstream. But the policy causes resentment among other communities, who say it freezes them out.

Shops were again torched on Sunday and protesters carrying weapons rampaged in the streets despite the extra troops, many of whom were airlifted into the state to try to quell the violence.

“A mob attacked the police post in Kalanaur town and set it on fire. Twenty shops adjacent to the post and a school were also gutted,” local police officer Hari Om said in Kalanaur in Haryana’s Rohtak district, the epicentre of the violence.

“The clashes are ongoing and we had to use firearms to break up the protesters,” the officer told AFP.

An AFP photographer said he saw mobs, some armed with swords and sickles, running through the streets in Rohtak and trying to stop the media taking pictures.

Earlier he saw at least a dozen gutted buildings including a school in the town of Sampla five kilometres (three miles) from Rohtak city.

The Indian capital’s water supplies were hit after media reports said mobs forced the shutting of a canal in Haryana which takes water to the neighbouring capital’s treatment plants.

Delhi Chief Minister Arvind Kejriwal announced water rationing throughout the city, and said all schools would be closed on Monday to conserve supplies.

“Water to be equally rationed amongst all. Pl save water. Schools closed tomo,” Kejriwal said on Twitter.

One of India’s largest carmakers, Maruti Suzuki, suspended operations at its two Haryana plants after the protests disrupted supplies of components, a spokesman said.

Jats are the single largest community in Haryana, with nearly eight million members, and are traditionally a farming community. They have been angered by comments in recent weeks by a BJP leader who opposed reservations for them.

Hundreds of trains in the state have been cancelled or diverted since Friday, an official said. “Ten small and big railway stations have been burnt. The mobs set fire to rail engines and bogies,” railways spokesman Neeraj Sharma told AFP.

That state saw weeks of protests by the Patidar or Patel caste, who demanded the same treatment afforded to lower castes.