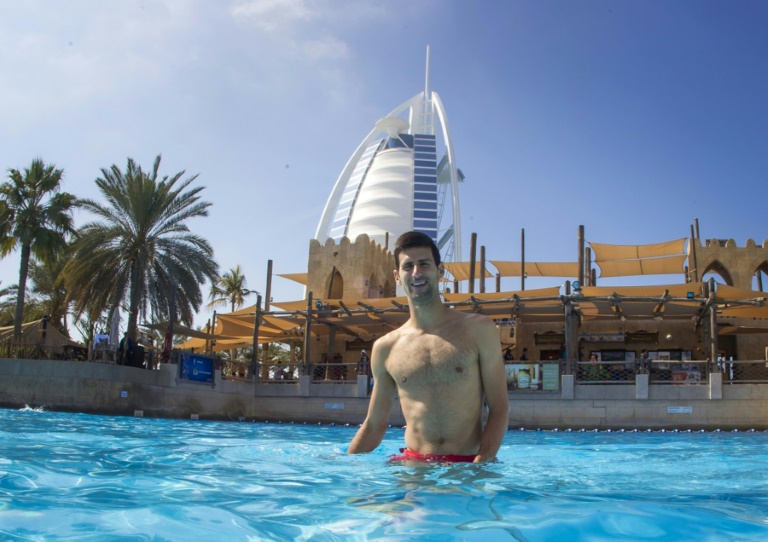 After decompressing at home with the family in Monte Carlo in the wake of his sixth Australian Open title, unbeatable Novak Djokovic is primed for a return to the courts at the Dubai Tennis Championships starting on Monday.

The world number one who owns four titles at the Aviation Club (2009-2011 and 2013), will take the top seeding ahead of French Open champion Stan Wawrinka and number three Tomas Berdych.

Missing from the hardcourt field is Roger Federer, winner of the last two editions, and Andy Murray, who remains at home with his family after the birth of his daughter this month.

Djokovic arrived early in the sun-soaked emirate from the European winter and promptly hit the practise courts, pausing for a photo session at a massive water park close to his suite at the seven-star Burg al-Arab hotel.

The Serb who lost the 2015 final to Federer will be keen to keep the winning 2016 momentum on his side as he opens play against Spain’s Tommy Robredo, whom he has beaten in six of eight meetings.

“No doubt that I’m playing the best tennis of my life in last 15 months,” Djokovic said after Melbourne. “Everything is going well privately, as well.

“I became a father and husband, I have a family, so I feel like I’m at the point in my life where everything is working in harmony.”

Wawrinka returns to Dubai for the first time since 2008 and will be looking for his first victory here.

The Swiss player’s game has stalled since winning in Chennai to start the season as he went out in the Australian Open fourth round and lost in the Marseille quarter-finals to France’s Benoit Paire.

Berdych, a two-time finalist, was put out by Djokovic in the semi-finals a year ago. The Czech is seeking his first trophy since winning Stockholm last autumn and begins in the first round with Joao Sousa of Portugal.

Joker in the pack for the week will be Nick Kyrgios, whose explosive no-holds-barred game will be on display for the first time in the city-state.

The colourful and controversial Australian ranked 41st, will begin his debut as he faces seventh seed Martin Klizan, winner of the Rotterdam title a week ago over Gael Monfils.